Harry Kane nets winner for Spurs but is stretchered off 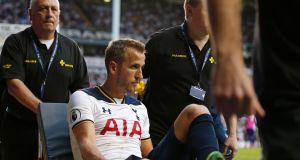 Tottenham Hotspur’s Harry Kane is wheeled away on a stretcher after leaving the pitch injured during the Premier League match between Spurs and Sunderland at White Hart Lane. Photo: Getty Images

Tottenham nudged up to third in the Premier League with a tight, keenly fought but somehow oddly inevitable 1-0 home defeat of a muscular but cautious Sunderland. David Moyes’ team came to White Hart Lane to defend and did so well enough for 58 minutes until a slip from Papy Djilobodji after a spell of draining pressure gave the ball to Harry Kane in front of goal. Kane had time to take a touch, before side-footing the ball into the corner to break a strictly localised White Hart Lane goal-blank stretching back to March.

Mauricio Pochettino will be pleased with the win after a busy week, less so with injuries to Kane and Eric Dier that saw both substituted in the second half.

For Sunderland, listing along joint-bottom with Stoke on one point from five games, these are creaky times. This week Moyes even suggested there might be some intangible mental weakness behind his team’s poor start, even perhaps a non-specific “something” that goes beyond rational explanation: a bad vibe, a hex, a shadow to be lifted.

Defending properly, as they did here for the opening 45 minutes, might be one way of shifting that mysterious cloud. Offering a little more adventure might be another, not least against opponents who did seem a little vulnerable on the break when Sunderland managed to commit Adnan Januzaj and Steven Pienaar forward in support of the rather lonesome Jermain Defoe. Sunderland might have even gone in 1-0 up at half-time had Pienaar been able to beat Kyle Walker on the goal-line – as he should – after good work from Januzaj on the break.

It was a rare attack from the blancmange-coloured shirts on a still, grey North London afternoon, with the piles of displaced earth, the huge clanking steel armature of the new stadium now rising above the open corner at one end. Spurs were dominant if a little imprecise right at the last during a first half that brought pressure and drive down the flanks but no way past the athletic and assertive Jordan Pickford.

Pochettino has spoken of the need to find other gears, other ways of playing and here he changed the tone and texture of his midfield, bringing in Mousa Dembélé, Moussa Sissoko and Victor Wanyama, with Eric Dier dropping into the back four and Jan Vertonghen shifting to left-back in place of Ben Davies. Dembélé in particular has been missed during his ban, a complete central midfielder with muscle as well as craft, able to pass, dribble and keep the ball.

Spurs started with purpose, Son Heung-min – who played well here – and Sissoko flashing the ball across the face of goal after driving runs down left and then right. Jason Denayer, a 21-year-old Belgian on loan from Manchester City, had been a late change to Sunderand’s starting eleven, replacing Patrick van Aanholt and making his first Premier League start. Understandably, he struggled for a while as Spurs got down the left again, Kane drawing a smart near-post block from Pickford with a first-time shot from Son’s cross.

With half=time seven minutes away Son cut inside Denayer and spanked a low shot on to the foot of the post. Dembélé had a shot deflected just over during a flurry of corners.

At times the Lane grew a little quiet and tetchy as Spurs pressed without picking out the final pass. The chief complaint about playing Champions League games at Wembley is an apparent lack of atmosphere, an intimidation deficit. At times here during the first half as Sunderland also began to press a little, Defoe getting his first sight of goal, the only noise was Pochettino up on the edge of his technical area fog-horning instructions to his players.

Moyes had also shuffled his team, bringing in Didier Ndong for his full debut and restoring Lee Cattermole to the central hustler’s role. Sunderland held out, rarely pushing across halfway, but were reeled in after half-time as Dele Alli began to move nicely across the front line. It was his skip across the box that made space for Dembélé to play a lovely little pass to Son, whose shot billowed the side netting.

Finally Sunderland blinked, concentration worn thin by some fairly non-stop pressure. Walker swung a high, swirling cross in from the right, Alli nodded it down, Djilobodji made a horrible attempt to control it on his chest, deflecting the ball to Kane who finished easily.

With the game drifting away Moyes decided to abandon the deep-lying trench defence. Duncan Watmore came on to provide his slightly raw gambolling menace down the right. The game began to stretch out a little. Spurs might have scored again, but couldn’t find the final pass. Vincent Janssen’s wild blast over the bar in stoppage time was a fitting end to a slightly fretful match.