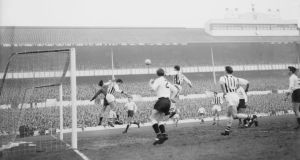 If so, it would be a fitting tribute to mark the 50th anniversary of the afternoon goals arrived like drifting snowflakes across England.

On St Stephen’s Day 1963 10 top-flight matches in the old First Division delivered no less than 66 goals. It remains a record tally. The rat-a-tat videoprinter must have been on the verge of meltdown. When the goal-flashes began to roll in from Craven Cottage, there may have been requests for independent verification. The final score was Fulham 10 Ipswich Town 1.

“I scored the ninth,” said Alan Mullery, when recalling the game. “I remember that day was an absolute rout – Graham Leggat scored four. Leggat was a Scottish international, we had Johnny Haynes, captain of England, George Cohen, Bobby Robson. Fulham had a good team.

Best side
“Ipswich were good too and they played their best side that day. It was just one of those days.”

Just 18 months earlier, with Alf Ramsey as manager, Ipswich had been champions of England. Now, with Ramsey gone to manage the national team and Jackie Milburn in charge, they were on their way to relegation, conceding no less than 121 goals.

In those days at Christmas, clubs met back-to-back, so at Portman Road, the dominant Fulham of December 26th were beaten 4-2 on December 28th.

“There always used to be strange results at Christmas,” Mullery said. “It was something you just couldn’t get the gist of. You could win heavily and lose heavily.” Mullery was correct. It beggars logical analysis.

You can imagine Matt Busby’s consternation. The defeat left United six points off leaders Blackburn Rovers at a time of two points for a win. Busby, it transpired, made an historic phone call that night.

Two days later, at Old Trafford, it was Manchester United won 5 Burnley 1. Busby had reacted to the hammering at Turf Moor by recalling a 17 -year-old from Belfast: George Best made his second appearance for United and scored his first-ever goal for the club. Best had been disappointed to be let return to Belfast for Christmas.

The plane
After Turf Moor, Busby rang Best and told him to get on the plane to Manchester. Best stayed in the team after that. As Eamon Dunphy recalls in A Strange Kind of Glory, “Bobby [Charlton] was one among many convinced that Best was special after this [5-1] performance.”

Having finished 19th in the league in 1962-63, United came second in 1963-64. Liverpool made a similar leap forward, going from eighth to first. This was Liverpool’s first title under Bill Shankly.

Asked whether goalkeepers were significantly worse then than now, Mullery had said: “No, I don’t think so. Roy Bailey, father of Gary Bailey of Manchester United, was the Ipswich keeper that day. He was a decent keeper.

“There were plenty around – in the early 60s you had Gordon Banks, then Pat Jennings. Bert Trautmann was still around, Bert Williams at Wolves before that. Of course there were probably a few duff ones too.”

St John recalled goalkeepers then rarely left the goalline and were called ‘linos’.

“They stayed on their lines and that meant forwards had more space in the area,” he explained. “In those days there were a lot of classy forwards and forwards were definitely in the ascendancy.”

Jim Standen was in West Ham’s net that famous day. So was the ball – eight times. West Ham 2 Blackburn 8 was another of the incredible scorelines.

Standen was back in goal two days later at Ewood Park when West Ham won 3-1.

Was there a lot of eating and drinking done then at Christmas-time?

“There was no overindulgence at all,” St John said. “We had back-to-back games. Shanks used to say: ‘We have a Christmas in the summer.’

“There wasn’t the emphasis then on defence that grew under George Graham at Arsenal for example. You never heard a phrase like ‘shutting up shop’ when I was starting out.

Defensive mentality
“We won the title that season, ’63-64, and then went into Europe. That was a big influence on how Liverpool played. For the first time you needed to have a defensive mentality because you didn’t want to concede away goals at home. This was knock-out.

“That was 1964 when Liverpool were first in Europe but we were in it for 20 consecutive seasons until Heysel. So you can see how European football changed the way we thought and played. It was about keeping the ball, not just attacking.”

Pre-Suarez, Liverpool began this season with three 1-0 wins. In 1963, the lowest score was Leicester City’s 2-0 win over Everton. There was also one game postponed due to the weather in 1963. Two days later at St Andrews it was Birmingham 1 Arsenal 4. That 66 total could have been 71.

And Manchester City? They were a second division team then and would remain so until 1966. But they enjoyed St Stephen’s Day 1963. They were at home to Scunthorpe United. City won 8-1.