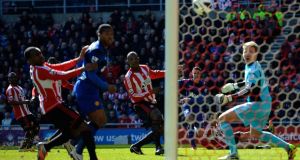 Sunderland 0 Man United 1: Manchester United briefly moved 18 points clear of their near neighbours and defending champions this afternoon with a one-goal win over Sunderland at the Stadium of Light.

Robin van Persie claimed the winner after seemingly ending his barren spell, but it will do down as a Titus Bramble own-goal after the defender’s attempted block directed it past Simon Mignolet.

"Of course, no question about that," insisted van Persie when asked on Sky Sports whether the goal was his. "It was an important goal and today was all about the three points.

He added: "This team is just full of winners, everyone knows what they have to do. I was never in doubt, despite the low score, 1-0, I was always confident we would win the game."

As is so often the case when strikers end a luckless run, it came with its fair share of good fortune, but there was nothing fortunate about the win.

United looked comfortable throughout, while the homeside were a rudderless operation for almost an hour, devoid of any real attacking intent and reliant on hopeful crosses to isolated frontman Danny Graham.

Their second half performance may offer their fans some hope they can reverse a horrible run of form, but having now played a game more than those beneath them, two in the case of Wigan Athletic, they lie 16th, four points off the drop zone.

It was United's seventh successive league victory and their 25th in 30 games, a new record, on a day when they were far superior to their relegation-threatened hosts for long periods, but were unable to make their superiority tell.

“The players have been galvanised. Their spirit, concentration and focus have been excellent,” said Alex Ferguson afterwards.“We have 25 wins from 30 games, which I think is a record, and that’s all down to the efforts of the players.

“We just have to win games and that is the important thing to focus on.”

On Van Persie, who had been without a goal in seven games, the Scot added: “When you do get back scoring you get back into the stream. I’m not sure if it was an own goal but it was a wicked hit from him, a fantastic shot.

“Sunderland had a real go at us. We had a few crosses to deal with and it was an important win.”

Sunderland remain in big trouble towards the foot of the table and their fans are worried as their fixture list is showing no signs of doing them any favours. Manager Martin O’Neill, though, thinks he has seen enough to suggest they will be okay.

“I thougt we were tentative and nervous and the start but then we stormed into the game in the second half,” he said. “I was very pleased with the team. I was delighted with the effort of the team and it bodes well. There is some determination in that dressing room.”

Summer tours next in line for postponement as rugby assesses options 05:00
Favourite sporting moment? It’s a bit like choosing your favourite child . . . 01:00
My favourite sporting moment: When Zidane glided through Brazil in 2006 01:00
Angling Notes: Many fisheries have closed for the foreseeable future 00:00
Man City’s Gundogan says Liverpool deserve title if season cancelled 20:32