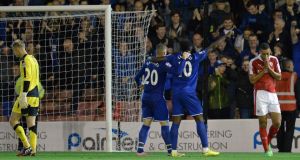 John Stones started for Everton the day after submitting a transfer request but was part of a side which was given an almighty Capital One Cup scare at League One Barnsley.

The 21-year-old retained his place in the team at Oakwell despite 24 hours earlier telling the club he wants to leave after Chelsea had three bids rejected.

Stones wants to play in the Champions League under Jose Mourinho and labouring to a 5-3 extra time League Cup win over a team two tiers below will not come close to matching his aspirations.

That is not to say the England international was not entirely without his share of the blame; he jumped over Sam Winnall’s shot for the opener and then appeared to be half-asleep in allowing Marley Watkins to nip past him in a crowded penalty area and poke home with just 28 minutes gone.

Three second-half goals for Kevin Mirallas, Steven Naismith and Romelu Lukaku to the one of Dan Crawley goal took the tie into extra time, which was decided by Marc Roberts’ own goal and Lukaku’s second.

An early exit for third successive season — manager Roberto Martinez, an FA Cup-winner with Wigan, has yet to get Everton past the third round in this competition — would have added another level of external pressure to add to the internal strife he is suffering dealing with transfer requests.

Stones’ reputation as a model professional convinced the Spaniard he was safe to play the defender but that decision was questionable after a tumultuous 24 hours for the youngster, who made one second-half tackle that was uncharacteristically late.

But even if Stones, for whom cheers turned to jeers, has declared his desire to leave it would be unfair to lay all the fault at his feet.

Aiden McGeady’s first appearance of the season lasted just 45 minutes while the likes of Lukaku, Naismith and Mirallas offered little attacking threat in the first half with Tom Cleverley and Muhamed Besic failing to get to grips with midfield.

Changes at full-back — Bryan Ovideo was handed his first start since February and 20-year-old Matthew Pennington his debut — did not help Everton’s defensive stability and they suffered midway through the first half.

Stones initially blocked Winnall’s attempt at the near post, Pennington and Phil Jagielka collided with the Everton captain inadvertently diverting the loose ball back to Winnall, a free signing from Scunthorpe last summer, and Stones failed to block the shot.

A second-half Mirallas volley and Naismith header were quickly followed by Crowley’s strike and although Watkins’ later challenge on Ovideo looked like a penalty it was Lukaku who made it 3-3 courtesy of Gerard Deulofeu.

The summer signing from Barcelona’s half-time introduction proved to be a game-changer as his cross was turned in by Roberts before Lukaku made the game safe.

But if Everton defend this badly to lower league opposition with Stones in the side the prospect of losing him without an adequate replacement in position will be a worrying one for Martinez.