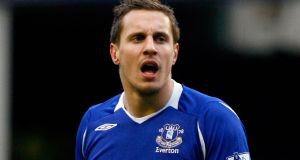 Phil Jagielka: Everton captain has found himself out of the team in recent weeks. Photograph: Peter Byrne/PA

Everton have confirmed that the club will not be signing the Algeria striker Ishak Belfodil in this transfer window. The 24-year-old Standard Liège player was a target identified by the Everton director of football, Steve Walsh, the man who unearthed Belfodil’s compatriot Riyad Mahrez for Leicester.

Discussions took place between the two clubs about a £10.4 million move, but Ronald Koeman was not completely convinced.

“Belfodil was one of the players on our list and we had the opportunity to buy him, but we took the decision not to sign him,” the Everton manager said.

Koeman would not go into details, though it is understood there were financial complications that put off Everton in addition to the manager’s reservations about whether Belfodil would improve the team.

“We are still hopeful of bringing more players in, but only if they make the team stronger,” Koeman said. “We do not need to sign anyone to add to the numbers, because that is not what I like. It is sometimes difficult to sign players at this stage of the season, but maybe there is a situation where we can’t sign the player we want now but we can in the summer.”

Everton have an interest in the Lille forward Martin Terrier. The 19-year-old made his first Ligue One start last week and is highly regarded by the French club, which has just been bought by the Luxembourg businessman Gérard Lopez. West Ham have also watched Terrier in recent weeks, although it is expected it would take a sizeable offer to persuade Lille to part with one of their rising stars.

Koeman also confirmed that Phil Jagielka and Gerard Deulofeu, two players who have lost their places in the team in recent weeks, would be allowed to leave if suitable bids were received. Milan have been in negotiations over a loan move for Deulofeu, but the terms of the deal have been a sticking point and no agreement has been reached. The Spaniard has started only four Premier League games this season, two of which were in August, and has not been in the squad for the past three league matches.

The emergence of 18-year-old Tom Davies and the signing of fellow teenager Ademola Lookman, both of whom starred in the 4-0 win over Manchester City last weekend, has pushed Deulofeu further down the pecking order.

“I spoke to Gerry and it’s a difficult situation for the player,” Koeman said. “If he finds a solution to go and to play and to get game time, then it’s not a problem. But the final decision is by the board of the club and I did not have any call from the chairman that they agree something for Deulofeu.

“It’s always tough because you’re not really part of the team, you don’t get a lot of game minutes, but that’s the competition we have in the team. You have to always look for first what’s the best for the club and second what is the best for the player, and for Gerry the best is that he gets game time somewhere.”

Jagielka is in his 10th season at Goodison Park but has also found himself out of the team, with Ashley Williams and Ramiro Funes Mori preferred in the centre of defence. Sunderland have been linked with a move for Jagielka, which would see him reunited with former Everton manager David Moyes.

Asked if Jagielka might leave, Koeman said: “I don’t know. It’s all about if there is interest for Jag. Of course the last few weeks he did not start. He is important, he is the captain of the team. He is not happy because he is not starting, and that’s a good signal. What you need to do as a player is fight and make it difficult for the manager.”