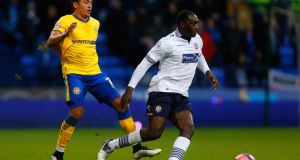 Emile Heskey is back in English football with Bolton having spent two season playing with Newcastle Jets in Australia. Photograph: Paul Thomas/Getty Images

The framed jerseys on the walls of the basement den in Emile Heskey’s Cheshire home provide a reminder their owner is in the twilight of a fine career.

Thirtysomethings all. Nicolas Anelka just above Steven Gerrard. Robbie Keane over Harry Kewell. Michael Owen, the player with whom Heskey forged a successful strike partnership for club and country, is given dual representation, with shirts from his Liverpool and Newcastle days.

On the pool table, a set of turntables call to mind their owner’s famous hand-on-ear disc-spinning DJ goal celebration. “You know what, the funny thing is you’re looking at them but they’re not mine,” he laughs. “I mean, they are mine but I don’t use them. The wife uses them.”

Although he no longer mans the steel wheels, Heskey proved he has still got what it takes to get a crowd on their feet by coming off the bench to score in a victory for Bolton Wanderers against Blackburn Rovers on his St Stephen’s Day debut. It was an unlikely return to English football for the former international, who many presumed had played for his last club in England when he joined A-League side Newcastle Jets on his 2011 release from Aston Villa.

Heskey returns to his old stomping ground of Anfield to face Liverpool in the FA Cup this afternoon and it is evident he could not be more pleased. “It’s wonderful,” he says. “Who’d have thought at 37 I’d be going back to play at the club where I had so much success. We won a lot of trophies and the fans were wonderful for me and I thank them for that. Now I get the opportunity to go back and play against them.”

It was with Liverpool that Heskey enjoyed the best years of a successful career after signing from Leicester City, his home-town club. Having caught Gerard Houllier’s eye while playing alongside Owen for England Under-18s, Heskey scored 22 goals as Liverpool won their famous 2001 League Cup, FA Cup and Uefa Cup treble. He also helped keep the chamber loaded with many of the bullets that Owen fired on his way to being voted the European player of the year. “It just clicked like that,” he says of their little-and-large partnership. “Any time I was going up for the ball I knew where he was going to be and he knew where I was going to be.”

“It’s going reasonably well. Obviously, Neil, who I’m having to call gaffer now, has been amazing for me. He knew what I was capable of doing and it was just about me getting the opportunity to come in and train and show him what I could do. He’d tried to sign me for Celtic a couple of times when I was at Wigan and Villa and now this time he got me.”

Of his time in Australia, Heskey has only good things to say. As the Jets’ marquee player, he was the star of “Heskeycam”, a wheeze that enabled Fox Sports viewers to watch what was billed as “one hero; every pass, every run” against Melbourne Victory.

The source of much derision on this side of the world, it caught his two goals – one a superb bicycle kick – in splendid isolation. “It was a first for me, that’s for sure,” he says with a smile. “It’s an Aussie thing, isn’t it? I think it’s more Fox, they do these quirky things. They did another one, where if I scored in one particular game, everyone in the crowd got a free McDonald’s milkshake.” Naturally, he obliged? “Yeah. They were a happy crowd.”

“I was on the pitch to do a job,” he explains. “I did that job, even though scoring part was part of it. I did score, just not as much as everyone wanted me to, but I still was on the pitch for a job and generally I would do that job.” Did the criticism sting? “Only in the early years of my career,” he says. “I’m still playing, so if anyone’s wrong . . .”

Contracted to Bolton until their final match of this season, Heskey knows not what the long-term future holds and appears to have given it little thought. “I think the training and the banter with the lads is the main bit that I’d miss. I know a couple of lads that, even when they’ve retired, they’ve still gone in and trained for a month, just to wean themselves off it.” When it is put to him that this sounds genuinely sad, he concurs. “It is,” he says. “But that’s the most fun you have in football.”

As for Bolton’s chances at Anfield: “We’ve got a good chance,” he says. “On their day, they can beat anyone. Hopefully we’ll get them on an off day.”

After an FA Cup third round bereft of major upsets, Heskey’s return from the pitches of the A-League to Anfield was perhaps the greatest shock. Guardian Service