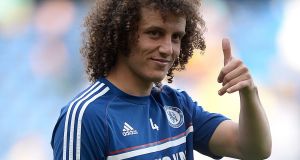 Chelsea have reached an agreement with Paris St Germain over the transfer of David Luiz. Photograph: Adam Davy/PA Wire

David Luiz is on the verge of a Chelsea return, two years after being sold to Paris St Germain for €60 million.

The Blues and PSG announced terms had been agreed for the Brazil defender to return to Stamford Bridge from Parc des Princes.

“Chelsea Football Club and Paris St Germain have agreed terms for the transfer of David Luiz back to London,” Chelsea said on their official website.

“The move is now subject to him agreeing personal terms and passing a medical.”

Luiz won the 2012 Champions League and 2013 Europa League with Chelsea before moving to PSG prior to the 2014 World Cup.

His likely acquisition was part of a busy deadline day for the Blues, who signed Marcos Alonso from Fiorentina and loaned Juan Cuadrado back to Juventus for three years.

Luiz joined Chelsea from Benfica in January 2011 and made 143 appearances, scoring 12 goals, before his departure three-and-a-half-years later.

The 29-year-old has played against Chelsea four times in the two years since leaving the Blues, as PSG were opponents in the Champions League in each of the last two seasons.

He vowed not to celebrate if he scored against his former club, but did so as PSG advanced on away goals at the expense of Chelsea in March 2015.

He is the latest former player to return to Chelsea. The Blues bought back Nemanja Matic, who joined Benfica as part of the deal which saw Luiz signed, while Didier Drogba recently had a second spell at Stamford Bridge.

Sunderland have broken their transfer record to sign Didier Ndong from Lorient.

The midfielder joins the Black Cats on a five-year deal for €16 million.

The 22-year-old arrives on Wearside having made 46 appearances for Ligue 1 Lorient since joining them in January 2015.

Ndong said: “I am very proud and happy to sign for Sunderland. This is a new adventure for me and to play in the Premier League is a dream come true.

“Maybe the Sunderland fans don’t know me yet, but I promise that they will quickly discover that I will give everything for them and the club. It will be an honour to wear the Sunderland shirt and I will wear it with a true understanding of what it means.

“I am excited to meet everyone at the club, to see the stadium and of course the fans, who I have heard so many good things about. Today is the most beautiful day of my life.”

A central midfielder the Gabon international previously played for Tunisian side CS Sfaxien, where he made 40 appearances, before signing for Lorient.

He has also has 18 caps for his country after making his debut for the national team in 2012.

Sunderland have also been linked with Norwich pair John Ruddy and Steven Naismith, with boss David Moyes managing both players at Everton.