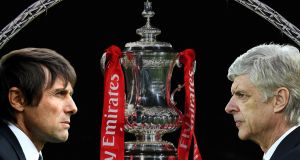 Antonio Conte: “For sure, I don’t trust that tomorrow will be the last game for Arsène.” Photograph: Laurence Griffiths/Getty Images

Antonio Conte is ready to sign a contract extension with Chelsea, which will establish him as the highest-paid manager in the club’s history as he seeks to secure a Premier League and FA Cup double with victory over Arsenal at Wembley on Saturday.

Chelsea are expected to offer the Italian a deal worth around £9.6 million (€11 million) a year until 2021, two years beyond his current contract’s expiry, in the wake of a hugely impressive first year in English football. Conte anticipates returning briefly to Italy for a break after the FA Cup final and the club’s end-of-season awards night in Battersea tomorrow, but will soon be back to continue planning for next season.

Confirmation of his new deal will follow. “My situation is very clear: I have two more years’ contract with the club,” said Conte. “Then, if the club give me the possibility to stay here and to extend my contract, for sure I am available to do this. We have the same idea about the future and we’ve started to work for next season. For sure we’ll try to improve our squad because we have to face an important competition in the Champions League. But I think the club and me, we have the same point of view on this. I hope to stay here for many years.”

Conte, who has been the subject of strong interest from Internazionale, is understood to be stepping up his English lessons this summer and will be joined in England by his wife, Elisabetta, and nine-year-old daughter, Vittoria. The 46-year-old’s focus at present is on achieving Chelsea’s second double, and he has admitted the team’s progress has surprised him, particularly after they were badly beaten at Arsenal on September 24th.

That 3-0 defeat prompted Roman Abramovich to spend three days at Cobham observing training. The owner’s presence might, in the past, have signalled the worst for the manager. “But he watched our sessions, saw our video analysis and stayed with us, supporting me,” said Conte, who is expected to prefer Nemanja Matic to Cesc Fàbregas in the Chelsea midfield for the final. “He never showed me he was angry. I think the club always saw my job, during preseason and in that period, and trusted in me. I never thought the club was thinking about sacking me. Honestly.

“But it was very difficult to think we’d arrive at the end of the season and be celebrating winning the league back then. We had a lot of big problems to solve and to find the right solution quickly is not easy. In fact, at the start of the season, if you’d said we could qualify for the Champions League, I’d have signed for that. But then I found great players, players who could implement our ideas and changes, and we were able to change our season.”

Chelsea’s recovery from that defeat at the Emirates extended to a 13-game winning streak, with the title claimed by seven points from Tottenham. The champions’ motivation at Wembley extends to setting an early tone for next season. “All of the players are ready and even for the next season I think Saturday is a good opportunity to put pressure on Arsenal and on all our rivals also,” said Eden Hazard. “If we win, it’s good to prepare the next season.

“I hope this is the start of something. We have this new manager, we have a couple of young players, so everything is ready to build. The last 10 years in Chelsea were great. The team won a lot of trophies, but now it’s like a new generation. Frank Lampard is finished, Didier Drogba is finished, Ashley Cole, now John Terry. All gone. So it’s a new generation and we want to prove that the club is one of the best in the world. We have to be ready for that.”

Abramovich will fund further strengthening, with the Monaco midfielder Tiemoué Bakayoko expected to be the first player to move to Stamford Bridge. Southampton’s Virgil van Dijk is another target.

Former Chelsea striker Gianluca Vialli this week called on Conte to emulate Sir Alex Ferguson’s lengthy tenure at Manchester United and the Blues boss said he was keen to build for the long term.

“It would be great to do this,” Conte said. “For a coach, that’s the best solution – to stay for a long time at the same club and build, with the club, something important.

“But you know very well that modern football is dangerous. Our job depends a lot on the results. I think the only way that I know to convince the club I should stay a long time is to work very hard with my players. For sure, that is my hope.”

Arsene Wenger is into his 21st year as Arsenal manager but the Frenchman is yet to confirm his plans for next season.

The Gunners are chasing redemption at Wembley after missing out on Champions League qualification in what could be Wenger’s final match in charge.

“When you stay for a long time at the same team – we’re talking about a great team, not a small team – we must consider him like one of the best managers in history,” Conte said.

“For sure, I don’t trust that tomorrow will be the last game for Arsène. I think he deserves to work with Arsenal because he showed, in these 20 years, he is a good manager. He did a good job. Only this season they missed out on the Champions League. In England, this target, sometimes you can undervalue this.”

Chelsea undoubtedly start as favourites to lift the cup after finishing 18 points ahead of Arsenal.

“Instead, we face a team who lost out on the possibility to play in the Champions League next season and they have only this possibility to save their season.”

Even if the game proves not to be Wenger’s last at Arsenal, it will certainly be John Terry’s farewell to Chelsea. The 36-year-old is leaving this summer, 19 years after making his debut.

Chelsea and Arsenal both cancelled plans for a victory parade on Sunday after the UK’s terror alert was raised to “critical” following Monday’s attack in Manchester.

Conte began his press conference on Friday by expressing solidarity with the bereaved families and called for a show of strength at the match this weekend.

“This situation, for sure, creates a bit of difficulty in your mind,” Conte said.

“If you start to think we are always in danger, then we have died before we die. A game of football or a concert is a moment you must live with passion, with passion and enthusiasm.

“When this type of situation happens, for sure, you are a bit scared. But we must continue to live and face every situation in the right way.”

Conte has a fully fit squad to choose from ahead of today’s game. He must decide whether to start Pedro or Willian behind his chosen striker.

Terry is likely to be named on the substitutes’ bench for what will be the 36-year-old’s final match before leaving Chelsea this summer.

Alexis Sanchez is expected to shake off a thigh injury in time for Arsenal. Sanchez limped off against Everton last weekend but is likely to be passed fit, while Alex Oxlade-Chamberlain is also in contention after recovering from a hamstring strain.

Laurent Koscielny, however, is suspended and Gabriel will miss out with a knee injury, meaning Per Mertesacker could make his first start in almost 13 months.

Arsène Wenger will make late decisions on Kieran Gibbs, who has a thigh problem, and Shkodran Mustafi, who is struggling with illness.