State of Play: When love of the Arsenal hits fever pitch for devoted Irish man 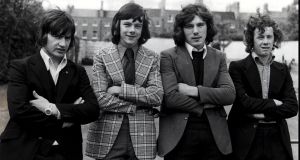 From left: John Murphy, Dave O’Leary, Frank Stapleton and Liam Brady in 1973 as they signed for the Arsenal.

When you’re a kid of Irish parents growing up in England in the 1970s, you learn to accept the fact that you’re a Paddy. Sure, it makes it that bit more confusing when you return to Ireland at the age of 10 to be instantly known as a Brit, but you lose the accent quick enough and soon people don’t bother.

Both my parents were from Drimnagh, and there was never any question that my brother and I were anything other than Irish. We went to a Roman Catholic school miles away from where we lived; from time to time we had Colcannon for dinner and we learned how to count to 10 in Irish, a true measure of one’s heritage.

But there were other ways of embracing your Irishness. Football was one of them

It still leaves you seeking some kind of identity though. There were other kids of Irish descent in the school, there was one round-headed fella called Eamonn, a much more Irish name than mine too. But there were other ways of embracing your Irishness. Football was one of them.

I don’t ever remember making a conscious decision to support Arsenal, but I’m sure the fact that the red and white of north London was tinged with green in that era was the key factor. My first footballing hero was Liam Brady and in the team with him at that time were David O’Leary, Frank Stapleton and John Devine.

There was also Pat Rice, Sammy Nelson and Pat Jennings, Northern Ireland internationals, and at that stage of my life north or south didn’t really register. They were just a different kind of Irish, but Irish all the same.

For a young lad looking for anything that would connect me to home, Arsenal was a big thing. Winning the FA Cup final in 1979 introduced me to the joy and terror induced by football. Two nil up with five minutes left and Manchester United scored twice, but before I could get too frantic Brady found Graham Rix who crossed to Alan Sunderland and the famous old trophy was Arsenal’s.

A year later we lost the FA Cup to second division West Ham and I’ve detested the phrase “stooping header” ever since, thanks Trevor Brooking. Four days after that I listened to the radio as Arsenal lost the European Cup Winners’ Cup final to Valencia. Liam Brady missed a penalty, then joined Juventus. I was devastated at the loss of a player I’d never seen in the flesh.

In 1981 we returned to Ireland, I was a Brit for a while and life went on. In 2001 I moved to Spain with my wife and daughter, three cats and a Basset Hound. I set up a website in 2002 called Arseblog and I began writing about Arsenal every day. It grew, the audience grew, and so too did the reach of the site.

Arseblog became more than just a daily blog about football, it became a community. The first time I met somebody from the site in real life, around 2004, there was that little voice in the back of my mind that wondered if he might kill me, because only weirdos used the internet to fashion a real world rendezvous.

The daily blog remains the centrepiece, but around it we have a seven-day-a-week news site, two podcasts a week, live events, books, videos, social media and lots more

He didn’t, obviously, and we had a couple of beers while shooting the breeze about a team that we can now look back on as probably the best Arsenal side of all time. That unbeaten season is now the most Arsene Wenger thing of all time – a brilliant, unique, thrilling accomplishment from a group of players that still managed not to achieve as much as they should have.

The daily blog remains the centrepiece, but around it we have a seven-day-a-week news site, two podcasts a week, live events, books, videos, social media and lots more. And while a very large proportion of our audience is understandably UK based, 25 per cent of it is now from the USA and we have visitors from almost every country in the world.

The ability to stream matches means fans from every corner of the globe can watch every kick despite the fact most of them will never be able to attend a game at the Emirates. Their passion for the club is obvious. They want to read about it, talk about it, love it, criticise it, and live it – day in, day out.

Arsenal will always be a club from north London, but you don’t have to be from that part of the capital to be an Arsenal fan. It is a massive global community and one of the great pleasures of doing the website is engaging with and meeting those fans. When I go to games, there’s always someone who’s making the pilgrimage from some far-flung country. The Arseblog community will help them with tickets, tell them where to drink, and make them welcome before, during and after the game.

It reminds you that while the football itself is obviously the most important thing, the point around which all else revolves, the football experience goes beyond what happens on the pitch. The social element is what makes it special.

I grew up kid who obsessed about Arsenal

I grew up kid who obsessed about Arsenal. But beyond collecting Panini stickers and watching Match of the Day, I had nobody to really share that with. Now I share that obsession with all the people who use Arseblog every day.

Tomorrow , as Arsenal head to Wembley to face Chelsea, 100,000 people will listen to our FA Cup final preview podcast being recorded at live event in London; thousands will follow the game on our live blog; the 275,000 Twitter followers and 480,000 Facebook fans will engage with our match report, player ratings, stats and everything else; and the tens of thousands of regular readers will use the website and our apps top keep tabs on the club they support.

Back in the 1970s I was an Irish lad in England seeking something Irish. Now, I’m a Irish man in Dublin who started a website while living in Barcelona about a team from London that has visitors from all over the world.

In many ways my connection with the Gunners defines me more than my nationality. But what I’ve learned over the years is that once you’re an Arsenal fan it does not matter where you come from.

Andrew Mangan is a writer, podcaster and voice-over artist. He founded the website arseblog.com in 2002, and writes daily about Arsenal football club, as well as contributing to the likes of ESPN, the Guardian, and others.

1 The Offload: Ireland are stuck in no man’s land
2 Munster beat Glasgow to keep their winning streak going
3 Every kind of wind imaginable was against Tipperary football - and they came through
4 Mickey Harte is the new Louth football manager
5 Depleted Liverpool dominate Leicester to set new Anfield record
Real news has value SUBSCRIBE
Crossword Get access to over 6,000 interactive crosswords