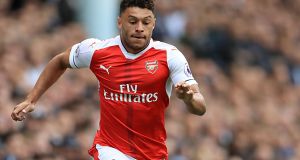 Alex Oxlade-Chamberlain: has been frustrated by having his position in the team chopped and changed. Photograph: Adam Davy/PA Wire

When Alex Oxlade-Chamberlain felt his hamstring tighten in Arsenal’s victory at Southampton a little over two weeks ago , there could be no prizes for guessing what flashed through his mind. “I thought: Oh no, here we go again,” he said. “It’s a bit of a trend, isn’t it?”

The 23-year-old had injured a groin in the closing weeks of the 2013-14 season and he would sit out Arsenal’s FA Cup final win over Hull City. Then, in 2014-15, he suffered problems with a hamstring and a groin as Arsenal approached another Cup final – this time against Aston Villa. He would recover fitness – at the very last – to feature in the 4-0 drubbing of Villa as an 89th-minute substitute, which he describes as a “nice moment”. However, he would surely have scripted it differently.

Oxlade-Chamberlain looked to be on for a hat-trick of misfortune when he limped off at St Mary’s, with Arsenal’s Cup final against Chelsea looming large at the end of the month. He has been plagued by muscular problems since a major knee ligament injury in August 2013 – a result of overcompensation – and the latest setback seemed particularly harsh given he had played in 44 matches for his club this season, a career high. Surely he would not recover quickly enough?

He has. Oxlade-Chamberlain returned to training last Saturday, and as Arsène Wenger contends with a selection crisis in defence, the player who has come to fill the right wing-back role in the manager’s 3-4-2-1 system says he is fit and “feeling good”. With Kieran Gibbs a doubt with thigh trouble, Oxlade-Chamberlain could even be asked to cover on the left side of the defence. Wenger would also consider using Héctor Bellerín there if Gibbs were to miss out. The Arsenal manager is already without Laurent Koscielny (suspension) and Gabriel Paulista (knee), while Shkodran Mustafi is a doubt with concussion.

“When you pick up injuries you put yourself to the bottom of the pile for a bit and have to work yourself up,” Oxlade-Chamberlain says. “That’s what has happened in recent years. But when I picked up this injury, I tried to attack the ground running and set out a plan that gives me the best opportunity to put myself in contention. I have carried that out.”

To Hull and back

Oxlade-Chamberlain seemed to suggest he thought he was fit enough to have featured against Hull in 2014. After the final he would join up with England for the World Cup in Brazil only to suffer a knee-ligament injury in a warm-up game against Ecuador. He did remain in Roy Hodgson’s squad but because of the knee – the condition of which would worsen – he was unable to play at the finals.

“I was gutted about the 2014 Cup final because I’d played a big role moving into the final and throughout the competition,” he added. “I even missed out on being involved and being on the bench.”

The immediate future is all that concerns Oxlade-Chamberlain and by that he truly does means the next game and nothing else. He shut down the question of where he sees himself being next season – most likely, on press office advice – but it was interesting to hear him say, once again, that his “main ambition” was to end up playing in central midfield. Could Arsenal grant him that wish?

Oxlade-Chamberlain has certainly been frustrated by having his position in the team chopped and changed, and he is poised to enter the final year on his contract. Liverpool are among the clubs credited with an interest in him, and it is far from inconceivable that the final could be his last appearance in an Arsenal shirt.

“The season has been an odd one,” he says. “You’ve got to move forward with the other top teams and we’ve failed to do that in the league. We can’t hide from that. But we’ve given ourselves an opportunity to win a trophy, which is what football’s all about.

“If we were to win, it makes it a better season, for sure. It would definitely boost morale going into next season.”