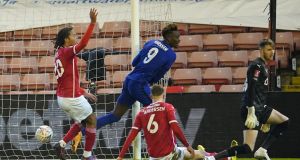 Chelsea’s Tammy Abraham celebrates after scoring the opening goal of the FA Cup fifth round win over Barnsley at the Oakwell Stadium. Photo: Dave Thompson/POOL/AFP via Getty Images

Chelsea are into the FA Cup quarter-finals due to an edgy victory over a Barnsley who made proceedings awkward for Thomas Tuchel’s team. If the eight-times winners hardly convinced the bottom line is that they next host Sheffield United in the competition and will fancy their chances of sealing a semi-final outing at Wembley.

Tuchel can be pleased as his side found a way to win and the German remains unbeaten as Chelsea manager. Another plus is how his players fought to defend Tammy Abraham’s decisive 64th-minute strike, the latter himself making one headed clearance from under the bar as full-time neared. For Barnsley there will be reflection on a classic what-might-have-been story. They just could not capitalise where it counts - in the danger area.

Valérien Ismaël arranged his 13th-placed Championship side in a 3-4-3 formation that had Cauley Woodrow splitting Conor Chaplin and Victor Adeboyejo in attack, and he ended the first half by far the happier manager. For this fifth match in charge, Tuchel made three changes from the last round. Out were Mason Mount, Reece James and Timo Werner as Marcos Alonso, N’Golo Kanté and Callum Hudson-Odoi came in.

Barnsley could be pleased with their start, pinning Chelsea back in a passage in which an opening corner was won and taken from the left by Callum Brittain. Although it was hit into a crowded area and came to nothing, the right wing-back did then go close to a dream goal. Alex Mowatt danced along the left and placed a cross in front of Chelsea goalkeeper Kepa Arrizabalaga that his defence did not deal with. Brittain’s close-range shot was struck hard but the goalkeeper beat it away.

What was an unfamiliar visiting side – there were actually 10 changes from Chelsea’s last match in the Premier League – were noticeably disjointed, as a second corner from the same left flank was again delivered by Brittain; this time, Chelsea just about survived. And while Christian Pulisic and Abraham are certainly familiar enough with each other, the shakiness extended to them when the former spurned a golden chance to slip the striker in by overcooking his pass.

Abraham then appeared to have a good shout for a penalty turned down by the referee, Martin Atkinson, who indicated that Toby Sibbick had taken the ball.

Those two moves did signal that Chelsea had woken up, though. On a surface that was looking increasingly cut-up, their collective class was emerging as Billy Gilmour, Hakim Ziyech and Hudson-Odoi all began to shine.

Yet the Mowatt-Brittain axis remained potent for Barnsley: another ball in from the left from Mowatt had his teammate running in to head until Alonso cleaned up for Chelsea. And Ismaël’s sided ended the half as they started: taking a corner. If Arrizabalaga clutched that delivery, the one taken moments before was a different story. It was taken from the right-hand side by Mowatt and the ball was worked to Brittain via Chaplin. His effort was goal-bound before taking a deflection.

For the second half Alonso and Andreas Christenen – who took a knock to the head – were replaced by James and Antonio Rüdiger. Tuchel’s instructions were obviously to inject more pace, Kanté showing how with one pass that zipped across the bobbly surface though Gilmour could not control.

Barnsley, to their credit, would not allow Chelsea to settle and it was a pity there were no home fans present as they would have delighted in their side’s display. On the touchline an angry Tuchel had invective for Abraham when his off-target flick to Gilmour meant another Chelsea move went awry. Better was a Hudson-Odoi run that cut through Barnsley but his attempt was wide.

Then, at last, came the breakthrough. Tuchel could be particularly pleased as his introduction of James proved pivotal: a sprint down the right took the right-back clear and when he tapped to Abraham, the striker was left with a simple close-range strike. – Guardian