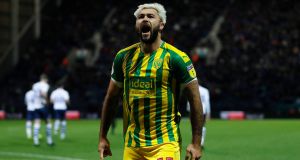 Charlie Austin’s controversial 90th-minute penalty sent West Brom back to the Championship summit with a 1-0 win over Preston at Deepdale.

Austin was on hand to convert from the spot to secure the Baggies a fifth successive victory and move them back above Leeds.

Slaven Bilic’s side looked set to rue a number of missed opportunities in the first half as they struggled to break through a resilient Preston defence.

But Austin’s spot-kick moves them two points clear of Leeds, while Preston slipped to a third successive defeat as their unbeaten home record in the Championship came to an end.

The visitors were much the better side in the first half and Bilic would have been frustrated his side failed to lead at the break.

After a sedate opening, Nathan Ferguson had the first effort on 22 minutes. The right back’s surging run carried him from his own half to the edge of the Preston box but his fierce drive was tipped over by Declan Rudd.

That break sparked the Baggies into raising the tempo and more chances followed. Matt Phillips picked up the ball following a corner and curled a left-footed effort just wide from 22 yards.

Phillips then turned provider just after the half-hour mark as his pinpoint free-kick from the right found Kyle Bartley unmarked at the far post, but the centre back inexplicably side-footed wide with a clear sight of goal.

Scotland international Phillips’s turn and shot inside the area after 35 minutes was comfortably held by Rudd, before his powerful low drive was tipped around the post.

Preston’s only opening of a disjointed opening 45 minutes fell to Seán Maguire, who broke in behind from a throw, but the Republic of Ireland striker fired straight at Sam Johnstone from a tight angle.

Alex Neil’s side were vastly improved in the second period and created a flurry of chances just after the hour mark.

West Brom failed to clear the resulting corner and the ball was squared to Ireland midfielder Alan Browne at the far post, but his powerful strike was brilliantly blocked in his own goalmouth by Ferguson.

Once again the Baggies were tested from the corner but Jayden Stockley was unable to direct his header on target from a couple of yards out.

Bilic’s side increasingly struggled to break through a resilient Preston defence as the match wore on.

But the big moment came in the 89th minute, as Kyle Edwards surged through on goal and was brought down by a sprawling Rudd, although replays showed the home goalkeeper backing off the challenge as Edwards went over.

Substitute Austin made no mistake from the spot, sending Rudd the wrong way to seal victory.

Eoin Morgan: More than England’s captain, Dubliner is the team’s touchstone 06:00
Gerry Thornley: Ireland don’t want to box themselves into a corner 06:00
Kevin McStay: Maybe a knockout All-Ireland Championship is the long-term solution? 06:00
Successful year for Stephanie Meadow takes her to LPGA event 06:00
Owen Doyle: Ireland suffered from officiating of the breakdown 06:59