Sunderland’s wait for a home win goes on; Cardiff keep up chase of top two 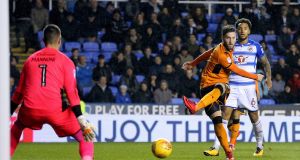 Wolves returned to the top of the Championship with a hard-earned 2-0 victory at lowly Reading.

After a slow start and two early scares, Wolves made the breakthrough when Ivan Cavaleiro waltzed free into the home area to jab home from close range.

Reading dominated large chunks of the second half but lacked penetration against a well-drilled Wolves defence.

Republic of Ireland defender Matt Doherty then sealed victory for Wolves when cutting in from the right to score with two minutes remaining.

Chris Coleman will take over a Sunderland side still looking for a home win in 2017.

Coleman resigned as Wales boss on Friday and is due to take the Sunderland job vacated by Simon Grayson, but knows he will be taking on a fight against a second successive relegation.

The Black Cats have not won at home this year and extended that record with a 2-2 draw against Millwall.

Lewis Grabban capitalised on a rejuvenated mood at the Stadium of Light and put the home side ahead, but George Saville scored twice in four minutes to turn it around after errors from goalkeeper Robbin Ruiter.

But a howler from opposite number Jordan Archer allowed Adam Matthews to at least give Coleman something to build on.

Cardiff remain in hot pursuit of the leaders and saw off Brentford 2-0 thanks to goals from Joe Ralls and Danny Ward.

A late goal from Jordan Spence earned Ipswich a 2-2 draw at struggling Hull.

Town led through Irish forward David McGoldrick but were pegged back by Jarrod Bowen and Nouha Dicko. When McGoldrick missed a penalty it looked like it might not be the visitors’ day but Spence equalised with two minutes left.

Josh Murphy put Norwich ahead at home to Barnsley, but they earned a 1-1 draw thanks to Harvey Barnes, while Albert Adomah’s brace helped Aston Villa reply to Jamie Mackie’s opener and beat QPR 2-1.