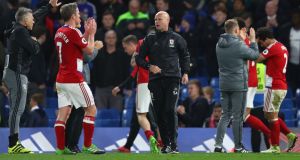 Steve Gibson is frequently, and usually quite rightly, presented as exhibit A when it comes to listing the properties required to run a football club properly. There are valid, enduring reasons why Middlesbrough’s owner and chairman is regarded as a role model in his field but this season even Gibson’s feet turned to clay.

Loyalty is normally to be applauded but in this case it proved self-destructive as he waited way too long to replace Aitor Karanka as manager and when he did, turned to Karanka’s assistant, the untested Steve Agnew, instead of appointing an experienced replacement. Agnew has collected only six points from a possible 27. If his elevation seemed like a cheap option at the time, it has proved to be appallingly costly.

There is talk now of Boro turning to Ryan Giggs – Gibson, who is advised by Peter Kenyon, the former Manchester United and Chelsea chief executive, knows his club lack box office appeal right now and has had past success with Old Trafford alumni in Bryan Robson and Steve McClaren – or maybe Nigel Pearson or Alan Pardew. Unfortunately, such promises of jam tomorrow cannot erase the sense of an opportunity wasted.

Gibson should arguably have sacked José Mourinho’s Real Madrid sidekick straight after promotion last summer. The Basque, remember, had been told briefly to stay away from the club by officials, missing a defeat at Charlton in March 2016, after a bitter dressing room row with players.

Although he returned, deep-seated fault lines remained and all the airbrushing in the world could not repair damaged relationships. The fallout dictated that Karanka persistently sidelined Stewart Downing – one player who might have made a difference – and the mood at Rockliffe Hall, Boro’s well-appointed training ground, never seemed quite right.

To varying degrees all managers are control freaks but Karanka took things to new heights, eschewing sensible delegation and creating an oppressive working environment which quite possibly ended up inhibiting certain players. Gibson, inexplicably indulging him, turned a blind eye until it was too late.

If Karanka was a brilliant defensive coach – Boro have conceded only 48 League goals this season while Hull and Swansea have let in 69 apiece – man-management was not the former Real Madrid central defender’s forte. He underestimated the importance of goalscoring, moreover, and arguably made a critical error in persistently refusing to pick Jordan Rhodes, a prolific scorer at Championship level who he moved on to Sheffield Wednesday in January.

The Teesside club somehow managed to win promotion having scored only 63 goals last season – Newcastle United rattled in 85 on their way to winning the second tier this month – but Boro’s safety-first tactics all too often left Álvaro Negredo, the £100,000-a-week loanee from Valencia, horribly isolated up front. Indeed, it is to Negredo’s credit that he registered nine league goals for a team who, during a particularly depressing six-game run between January and March, managed only one league goal, and that from the penalty spot.

Part of the problem was that of the nine players Boro signed last summer only one (the Arsenal loanee Calum Chambers) was British and most needed time to adjust to their new Premier League habitat. Whereas the former Atalanta midfielder Marten de Roon has improved over the campaign it quickly became clear that others, most notably the Denmark and former Ajax winger Viktor Fischer, were floundering.

If offering the gifted but flaky Uruguayan playmaker Gastón Ramírez a permanent deal proved a mistake, so too was swapping Albert Adomah for the erratically raw Adama Traoré.

The good news is that the majority of the players who won automatic promotion in 2016 and reached the play-off final the previous year remain and should, once again, be effective at Championship level.

George Friend, Adam Clayton, Adam Forshaw, Dani Ayala and Downing know how to win second-tier games. Similarly, Karanka’s January signings, Rudy Gestede and Patrick Bamford, may not be quite good enough for the top flight but they could prosper a division lower.

Víctor Valdés, the former Barcelona and Manchester United goalkeeper, will almost certainly depart but Connor Ripley – the son of the former Boro, Blackburn Rovers and England winger Stuart Ripley – has attracted rave reviews on loan at Oldham, keeping more clean sheets (18) than any other League One keeper.

If Ripley starts next season in goal he is unlikely to have Ben Gibson in front of him, with the owner’s nephew, impressive at centre-half this season, likely to be the subject of a Premier League bidding war.

Gibson Sr has indicated that any money raised from sales will be reinvested in the team and such a cash infusion will surely be necessary in what promises to be an ultra-competitive division, with Sunderland, Aston Villa and Leeds United among those desperate to finish in the top two.

Having money is one thing, spending it astutely quite another, so Boro’s owner needs to ensure he gives it to the right manager. If Gibson is to restore his sure-footed reputation, he must imminently make a very big decision – and this time get it right.

1 Waterford turn Kilkenny upside down and inside out
2 Jim McGuinness: There is a way to save championship and make it competitive
3 Has Mike Tyson completed the least likely redemption story in American sport?
4 Ireland’s work-ons: Four things Andy Farrell needs to address
5 Waterford’s frenzied waves of attacks too much for Kilkenny
Real news has value SUBSCRIBE