Cesc Fabregas strikes late to push Chelsea towards the title 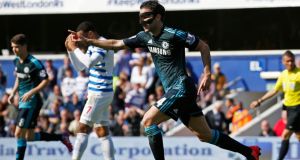 Managers and players will point to the fixtures still to be played, arguing there are potential slip-ups as well as opportunities still ahead, but this was the kind of result on which fates are confirmed.

Chelsea’s players gathered in front of the away support in the School End at the final whistle to celebrate a victory conjured with their first shot on target two minutes from time that maintains their seven-point advantage at the top. Queens Park Rangers, their reality far grimmer, dragged themselves from the turf in utter disbelief.

This was cruel on the home side. Chris Ramsey’s team had competed aggressively throughout, arguably posing the greater threat, only to implode at the last. Rob Green’s sliced clearance from hands barely stretched 20 yards into his side’s half, Eden Hazard collecting and darting forward at pace. The Belgian exchanged passes with Oscar before pulling back for Cesc Fàbregas to place the game’s only goal inside the post. Ramsey sank to his haunches, head in hands and back to the pitch. His team deserved better.

Chelsea knew they had been stretched, their forward-line blunted by injuries to Diego Costa and Loïc Rémy which will have implications for the games against Manchester United and Arsenal. They had toiled here and, as full-time approached, would probably have settled for a point only to squeeze the kind of win only champions can summon from the deadlock.

Fàbregas ripped off his mask as he sprinted into the corner in celebration pursued by team-mates. Those celebrations were interrupted as objected rained down, the home support’s disgust born of dismay.

This had been scrappy from the outset, a scarred playing surface and a swirling wind nullifying quality and attempts at composure. The conditions occasionally threatened to catch out both defences, Green almost embarrassed when Willian’s swerving cross thumped against his near-post while Thibaut Courtois denied Charlie Austin’s drive from distance.

Yet the frenzy allowed no time for either side to catch their breath and impose authority on the occasion. Chelsea had to wait until virtually the hour-mark to mount a period of sustained pressure, a passage of play which might have seen Bransilav Ivanovic convert Didier Drogba’s flick at an Oscar corner. The header, like much else, was mistimed.

Quite what Roman Abramovich, peering out at his 700th game through designer sunglasses, made of it all is unclear, but he could hardly have been impressed. Not least because QPR grew in ambition the longer the derby remained on edge. Sandro Raniere and Joey Barton had offered the hosts a tigerish platform from which to build, with the menace carried by Matt Phillips on the flank.

The winger has been revived under Ramsey, Chelsea straining to deal with his delivery from wide and Courtois conjuring a fine instinctive save when Phillips collected Bobby Zamora’s centre, turned Nemanja Matic with ease and spat a shot at goal.

The Belgian, beaten from 65 yards by Stoke’s Charlie Adam eight days earlier, was back to his inspired best and denied Austin again as the game edged towards its final moments.

QPR would have celebrated a point with gusto. As it is, they remain two points adrift of safety with games slipping away. This had ended up a numbing afternoon.

1 Betting shops face uncertain future as they prepare for Monday reopening
2 Tianna Bartoletta: ‘After you’ve gotten your medal, you become black in America again’
3 Mature Ringrose keeping the ups and downs of rugby life in perspective
4 How a GAA club sprang up in east Belfast over Sunday breakfast
5 Ian O’Riordan: An education in race and running during college days in America
Real news has value SUBSCRIBE