Burnley’s Stephen Ward is striving to beat the drop

Republic of Ireland international Kevin Doyle speaks about his experience of relegation, having been relegated from the Premier League with Reading and Wolves. Video: Gareth Maher 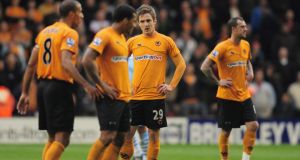 “It’s not nice and you feel like you’ve let people down . . . it is terrible to go through and you just have to accept it,” says Wolves striker Kevin Doyle, who has been relegated three times in his career. Photograph: Getty.

Preparing to leave Burnley’s Gawthorpe Hall training ground after another morning workout, Stephen Ward flashes a wide grin having shared a joke with a team-mate.

It’s an odd thing to see, almost like someone laughing at a funeral, because The Clarets are bottom of the English Premier League and running out of games to avoid relegation.

Ward’s workday, many would feel, should be akin to a laboured shift deep in the heart of a coalmine, where smiles don’t belong amongst the blackness.

Sean Dyche doesn’t subscribe to that theory though. The Burnley manager prefers to create a working environment where his employees (players) can complete their jobs without the weight of the world on their shoulders. So it’s not that Ward doesn’t care, it’s that his club thrives on confidence.

It was a very different scenario three years ago when Ward was part of the largest Irish contingent from one club to be relegated from the Premier League – when eight Irishmen went down with Wolverhampton Wanderers at the end of the 2011/’12 campaign.

Desperate to avoid that again, Ward is aware of the task at hand: collecting enough points to stay up.

Yet if Burnley do manage to pull off the great escape then it’s likely to result in one (or more) of his compatriots taking his place as 19 different Irishmen are in the relegation mix.

Still, Ward is staying upbeat and clutches onto the confidence exuded by his manager’s infectious personality.

Some may question it, but he reveals that despite everything that has gone wrong this season their approach has never changed.

“To be fair, for the whole season, we’ve had belief in our own ability as a team. We don’t really fear any one opponent, we just take each game separately and focus on what we have to do,” says Ward.

“If you look at when we went to Old Trafford to play Manchester United, we completely dominated them and that’s not something you see too often. But that proves what a good team we are.

“The same happened obviously in the win over Manchester City, but the only disappointing thing for us is that we haven’t always got the rewards for our big performances.

Bottom of the table

But it’s not just Ward and his fellow Irish team-mates at Burnley, Kevin Long and Steven Reid, who will be facing the relegation dogfight over the coming weeks: Shay Given, Ciaran Clark and Jack Grealish at Aston Villa; Hull City’s Paul McShane, David Meyler, Stephen Quinn and Robbie Brady; John O’Shea at Sunderland; and QPR team-mates Richard Dunne and Reece Grego-Cox are all at the coal face of Premier League survival.

Having been through it twice in the Premier League – firstly with Reading, then with Wolves – the 31-year-old striker is fully aware of what his compatriots will be feeling, not just on matchdays but in the idle hours when the fear of failure chokes its hardest.

“It’s not nice and you feel like you’ve let people down,” confesses Doyle. “I’m even par now, I’ve been promoted three times and been relegated three times, but it is terrible to go through and you just have to accept it. You’re going to have ups and downs in your career.”

The highs have been plentiful for Doyle since leaving Cork City in 2005 to prove himself in England as a striker who belongs in the Premier League – 37 goals indicate that – but relegation has pockmarked his CV in a way that few other things can.

Doyle, though, now views those “black marks” almost as a rite of passage, similar to injuries, suspensions, and unexpected transfers, for the majority of Premier League players.

“There are four divisions in England and three or four teams are going to be relegated, so it affects almost every player. If you go through the Premier League, there aren’t many players who haven’t been relegated. So if it’s a black mark on their career then almost everyone has one,” says Doyle.

“It’s a good experience in a way because it keeps you grounded and humble. It’s not nice and I wouldn’t wish it on anyone, but I’m afraid that for 75 or 80 per cent of footballers in England it’s going to happen and you just have to accept it.”

For the Irishmen scrapping to survive, they will need a smile from Lady Luck, a favour from the gods, and the bounce of the ball, but, most of all, they will need to maintain confidence.