Brighton draw another blank as Wolves take first spoils of 2016 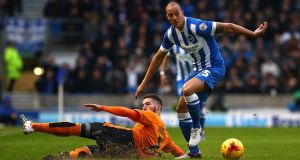 Bobby Zamora couldn’t end Brighton’s goal drought as they were beaten 1-0 by Wolves at home on Friday. Photograph: Getty

Chris Hughton may be turning to Richie Towell for insipration sooner rather than later after Brighton and Hove Albion failed to score in a fourth consecutive game on Friday.

Wolves meanwhile clinched their third consecutive victory as a first-half own goal by Connor Goldson gifted them a 1-0 win on the south coast.

The Seagulls, who have only taken one point over the festive season, dominated after the break, but Wolves defended stoutly to claim a third successive clean sheet.

Brighton went into the clash having failed to score for over five hours and boss Chris Hughton freshened up his front line by recalling strikers Bobby Zamora and James Wilson.

Beram Kayal put an early shot wide for the Seagulls before Albion goalkeeper David Stockdale saved a goal-bound shot from Benik Afobe with his legs following a powerful run by James Henry.

Wolves keeper Carl Ikeme came to his side’s rescue by tipping a fierce shot from Wilson over the bar in the 15th minute.

Wanderers, unchanged for the third match in a row, threatened when Dominic Iorfa set up Afobe, but his angled shot was held comfortably by Stockdale.

Brighton had failed to keep a clean sheet at the Amex since October and their defensive frailties surfaced again when defender Goldson gifted Wolves the lead with a 32nd-minute own goal.

Wolverhampton-born Goldson, 23, standing in for the injured Gordon Greer for the second time, stuck out a leg to divert a low cross from Jordan Graham into his own net at the near post.

At the other end Wilson — the striker on loan from Manchester United who was physically sick on the pitch during the first half — ran dangerously into the area shortly after the break, but his low shot was saved by Ikeme.

Central defender Lewis Dunk should have equalised moments later, but wastefully drove over from a pass by Goldson.

Jamie Murphy also failed to make the most of an opening when he blazed over having been set up by Wilson.

Wilson forced Ikeme to save smartly from his goal-bound shot after Hughton made his first change by introducing former Feyenoord striker Elvis Manu for the veteran Zamora.

Wolves almost doubled their advantage when a rasping drive by Conor Coady was tipped over by Stockdale.

Brighton piled on the pressure in the closing stages and defender Bruno Saltor was unlucky when his tremendous 20-yard drive came back off the crossbar.

Dunk later had a goal-bound header brilliantly tipped over by Ikeme in stoppage time.