Brendan Rodgers’ job not under threat despite dismal end to season 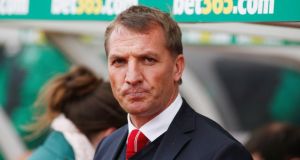 Brendan Rodgers’ job as Liverpool manager is not under threat, with the club having no plans to review his position despite their dismal end to the season that featured only one victory in the last seven matches.

Yet despite that, and a growing clamour from supporters to see the Northern Irishman replaced, owners Fenway Sports Group is not assessing whether he should continue as manager for next season.

There will, however, be a review of Liverpool’s disappointing campaign.

This will be led by Mike Gordon, the FSG president who is a member of the club board, plus Rodgers and Ian Ayre, the chief executive.

In the aftermath of the Stoke defeat Rodgers apologised to fans and appeared to throw his future into doubt by saying: “I’ve always said if the owners want me to go, I go. It’s as simple as that. I still feel I’ve got a lot to offer here. A lot has happened this year that has made the job difficult and we’ve kept fighting right to the very end but I totally understand that [question].”

When the review is held an explanation will be required for some of the more damning statistics returned by Rodgers’ team this year.

The defeat by Stoke meant the team finished in sixth place, compared with last season’s second, and the 62 points won were 22 fewer than in 2013-14.

There have been 52 league goals compared with the 101 Liverpool managed 12 months ago, and the 12 league defeats were twice as many as in the previous campaign.

Against the clubs that finished in the top four – Chelsea, Manchester City, Arsenal and Manchester United – Liverpool scored only one victory, over City, and managed a total of five points from the 24 available.

Adam Lallana, Emre Can, Dejan Lovren, Mario Balotelli, Lazar Markovic, Alberto Moreno, Rickie Lambert and Divock Origi were signed. There is a case to be made that all, apart from Can, have been a failure.

However, there is an acceptance that, having lost Suárez, who has been an integral part of Barca’s La Liga-winning success and their progress to next month’s Champions League final, Rodgers was bound to struggle to replace such a talent.

In addition, the controversy regarding Raheem Sterling’s public efforts to leave the club have been a distraction for Rodgers and his players, as has the farewell to Steven Gerrard that began when he announced in early January he would leave the club.

Yet despite these mitigating factors, Rodgers understands the dismay from fans and, more importantly, FSG, and knows that he must recruit well this summer as he will be under scrutiny when next season starts.