Bayern Munich give Paul Clement permisison to speak to Swansea 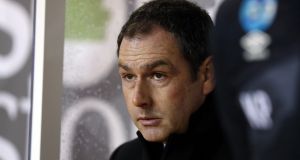 Bayern Munich have confirmed Paul Clement is to hold talks with Swansea City over the managerial vacancy at the Liberty Stadium. Photograph: PA/Martin Rickett

It was reported on Saturday evening that Swansea were set to appoint Clement as their third manager of the season.

Former Derby boss Clement emerged as Swansea’s number one target after Wales boss Chris Coleman turned down the opportunity to take over at his home town club.

And Bundesliga champions Bayern, in a statement on the official club website, said: “Co-coach Paul Clement has asked FC Bayern Munich to hold talks with Premier League club Swansea City about a commitment as head coach.

“Bayern’s head coach Carlo Ancelotti and the management board of FC Bayern Munich have fulfilled this wish.

“Paul Clement will therefore not be travelling to the training camp in Doha together with the team of FC Bayern.”

Swansea hope to confirm the appointment of Clement, who has worked alongside Ancelotti at Chelsea, Paris St Germain, Real Madrid and Bayern, before their Premier League game at Crystal Palace on Tuesday night.

Clement is expected to have a watching brief at Selhurst Park, with caretaker Alan Curtis taking charge of the team again.

Curtis was in charge of Saturday’s 3-0 home loss to Bournemouth — Swansea’s fourth straight league defeat — after the sacking of Bob Bradley.

Former United States boss Bradley was only at the Liberty Stadium helm for 85 days after succeeding Francesco Guidolin at the start of October.

Bradley’s reign was the joint-second shortest in Premier League history, and Swansea are now in grave danger of being relegated after six seasons in the top flight.

Swansea are rock-bottom with 12 points from the halfway mark of 19 games, and only one side in Premier League history has survived from a worse position.

That was the 2004-05 West Brom team which Clement’s brother Neil played for.

Swansea head to south London four points adrift of 17th-placed Palace, with Curtis saying he has to address a “crisis of confidence” on the back of 14 goals being conceded in four games.

“The first goal seems to be crucial at the moment,” Curtis said.

“Confidence seems to drain from us when we go behind.

“I suppose the explanation for that is that we are bottom of the table, we are not winning games and we are conceding too many goals.

“It’s a crisis of confidence when we concede a goal.

“I still think there should be enough in our squad to get better results, but confidence in sport, especially football, is such a fragile thing.

“But we just have to get on and prepare for the next game. That’s all we can do.”

At least Swansea can take heart from their astonishing 5-4 Liberty Stadium victory over Palace on November 26th.

On that occasion Spain striker Fernando Llorente — who is doubtful for the trip to Selhurst Park — scored twice in injury time after Palace had fought back from 3-1 down to lead 4-3.

It was a cruel blow for Alan Pardew, who was subsequently sacked as Palace manager less than a month later.

Since then Pardew’s successor Sam Allardyce has picked up one point from games at Watford and Arsenal, and the former England manager takes charge at Selhurst Park for the first time against the Swans.

“They’ve nipped in and got a very good manager there,” Swansea defender Neil Taylor said.

“He’s a specialist in being at this end of the league and pulling people through.

“I’m sure he will turn their fortunes around. But for ourselves it’s the same old thing, we have to go there and get a result.”