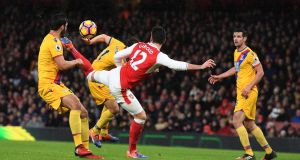 It was the sort of move that is more routinely associated with the skill buttons on the PlayStation. But when Olivier Giroud blurred the line between the virtually real and the gloriously tangible, he did more than set Arsenal on their way to victory over Crystal Palace. He lit up the Emirates Stadium and provided a memory for years to come.

Giroud’s 17th-minute opener recalled the finish of Henrikh Mkhitaryan for Manchester United against Sunderland on Boxing Day. There were shades of a scorpion kick, albeit with only one leg; a rainbow flick or whatever else the gamers want to call it.

But when Giroud’s back-heeled flick – reaching a distance behind him and on the run, too – arced in off the underside of Wayne Hennessey’s crossbar, the stadium and the watching TV millions felt their jaws drop in astonishment. Even Giroud himself looked a little stunned.

Arsenal coasted to the points thereafter, with Alex Iwobi providing the tempo and incision in the No10 role – in the absence of the ill Mesut Özil – together with the second goal, a looping header after a Palace aberration at the back.

Palace had a brief flurry around the hour mark but it was not an afternoon when the Sam Allardyce, could trumpet too many positives with any conviction. It said much that Palace’s new manager substituted Yohan Cabaye, Andros Townsend and Christian Benteke well before the end, with one eye, perhaps, on conserving energy ahead of the home game against Swansea City on Tuesday.

Giroud’s goal transcended the occasion and if the finish was a thing of exquisite class, it was worth going over every detail of the buildup, including the striker’s role in it, which was crucial.

After Lucas Pérez – on a rare Premier League start – had slid in to intercept the ball on the edge of his own area, Héctor Bellerín initiated the break with a sharp pass up to Giroud but it was what happened next that really got Arsenal moving. With a deft back-heel, he found Granit Xhaka and he played in Iwobi who, in turn, made the right pass forward to Alexis Sánchez.

Giroud had bolted up in support but, when Sánchez’s cross arrived, it was a full yard behind the striker. No problem. Giroud adjusted his body shape and, in a moment of improvisational genius, he had reached back his left boot, located the ball and flicked it with his heel over his head and towards the roof of the net. Hennessey could do nothing to keep it out.

The first thought was of Mkhitaryan but Giroud was further out than the United forward – he was about 12 yards from goal – and the goalkeeper was better placed. Either way, it illuminated this game to a degree that went beyond merely shaping it.

Giroud had been guilty of a bad miss on seven minutes, after Xhaka’s dinked pass out to Nacho Monreal and the full-back’s fine, first-time low cross. Giroud, in front of goal, could not set his feet in time and the ball flashed across him. Mohamed Elneny’s follow-up shot was headed away by James Tomkins. Giroud had sorted himself out by the time that Sánchez crossed for him shortly afterwards.

Arsenal called the tune and it said everything that when Cabaye had a shot on target in the 37th minute, which was the definition of a routine save for Petr Cech in the Arsenal goal, the travelling fans celebrated wildly. “We’ve had a shot, we’ve had a shot,” they chorused, sarcastically.

Palace’s chaotic streak at the back, which Allardyce has been charged with stamping out, was evident in first-half stoppage time, when a Bellerín cross sparked such panic that the only surprise was the Keystone Cops did not arrive on the scene. With Martin Kelly all over the place, Iwobi won the ball and Sánchez had a glorious chance from close-range. His shot, though, was too close to Hennessey, who blocked.

Allardyce was unhappy with a few of the challenges on Wilfried Zaha, in that they were not punished with free-kicks and the Palace winger seemed to spend a lot of time with his arms outstretched at the referee, Andre Marriner, and disbelief etched on his face. Zaha fired only in fits and starts.

Palace had to be better in the second half and they created a chance immediately after the restart that they simply had to take. From Townsend’s cross, Benteke found himself up against Bellerín and when he rose, so too did Allardyce’s hopes. But one of the best headers of a ball in Europe did not get a clean connection and the effort dribbled wide.

Pérez played off the right and he looked nervous and a little sluggish. But after Sánchez had seen a shot blocked by Scott Dann and Pérez had taken a heavy touch and overhit a cross, Iwobi put Arsenal into the comfort zone. Monreal’s cross was diverted high up into the air off Scott Dann and when it came down, Iwobi was all alone to head towards the far corner. Kelly, on the line, headed up against his own crossbar but the ball made its way in.

Palace had a purple patch. Benteke worked Cech with a header from a Jason Puncheon corner and Cabaye went close with the follow-up, while Kelly swung and missed when well placed and Cech was then made to save by Townsend. But this was a game that was all about one player and one moment.

1 European clubs must take lessons from financial demise of former greats
2 Munster braced for worst of financial crisis due to Thomond Park debt
3 Record numbers of adults in Ireland participating in sport and walking
4 When the action stops, sports photographers think outside the box
5 People who attended illegal match in France are asked to get tested
Real news has value SUBSCRIBE