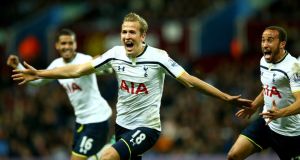 Tottenham’s Harry Kane celebrates as his deflected free-kick put his side 2-1 ahead in the Premier League game against Aston Villa at Villa Park. Photograph: Richard Heathcote/Getty Images

For Aston Villa it was a case of what might have been and the inquest will inevitably focus on that moment, midway through the second half, when Christian Benteke raised a hand towards the face of Ryan Mason and invited a red card. There was no real malice or force behind Benteke’s actions but the striker was playing with fire and the consequences for Villa were dire.

Tottenham Hotspur had looked desperately poor for so long here but, aided by their numerical advantage after Neil Swarbrick sent Benteke off, the visitors turned the game around with two goals in the final six minutes to cancel out Andreas Weimann’s early strike. Nacer Chadli got the first, volleying home Erik Lamela’s corner at the far post, before Harry Kane, who again started on the bench despite his excellent form in cup football, scored the winner in the 90th minute with a free-kick that took a deflection off Nathan Baker.

The outcome felt particularly cruel on Villa, who have now lost six consecutive league games – their worst run of results for 47 years. Spurs were running out of ideas in the second half until Benteke’s sending off gave Mauricio Pochettino’s side some fresh impetus but even then it was hard to see where a goal would come from. The result brings Pochettino some respite but it will not paper over the cracks of a woeful performance.

Villa had got off to the best possible start when Weimann ended a goal drought that had lasted nine hours and seven minutes. Cue some ironic humour. “We’re Aston Villa, we’ll score when we want,” reverberated from the Holte End. It was the first goal that Villa had scored since Gabriel Agbonlahor got the winner at Anfield on September 13th and exposed the defensive limitations in a Spurs defence that looked vulnerable throughout.

Danny Rose, the Spurs left back, was guilty of making a weak challenge on Charles N’Zogbia and the Villa midfielder was able to escape before sliding a low cross into the area that appeared to be intended for Benteke. Weimann, charging into the area, got their first, sliding on the wet surface and sticking out a leg to steer the ball inside Hugo Lloris’s near post.

As strange as it sounds in the context of Villa’s recent problems, that goal had been coming. Benteke was proving to be quite a handful and had already gone close twice by that stage. A diving header from Matt Lowton’s cross should have been buried but drifted wide, and two minutes later the Belgium international struck a left-footed shot from the edge of the penalty area against the angle of crossbar and post. Alarmingly for Pochettino, there was no Spurs defender anywhere near Benteke on both occasions. Another Benteke chance arrived in the 43rd minute when the striker, towering about Younès Kaboul, headed Aly Cissokho’s deep free-kick over the bar.

If there was one comfort from Spurs in a desperately poor first half, it was the fact that Villa also looked vulnerable at the back. Roberto Soldado and Kaboul both failed to score from close range, although the best opportunity for Spurs in the opening 45 minutes fell to Emmanuel Adebayor.

Released by Soldado’s astute pass, and aided by a Villa defence that had gone AWOL, Adebayor sprinted clear but his shot lacked conviction and Brad Guzan, to his credit, got down low to his right to turn the ball behind. Pochettino threw his water bottle down in disgust and Spurs fans made their own feelings known by singing Kane’s name. Those travelling supporters got their way in the 58th minute when Kane replaced Adebayor and the substitute almost had an instant impact with a header that Guzan was well-placed to save.

There were signs that the game was getting a little feisty when Jan Vertonghen was booked for two-footed tackle on Ashley Westwood that prompted a melee, but things boiled over a few moments later. Benteke was involved in an altercation with Lamela, who barged him after taking a kick from the Belgian. Mason then got involved and put his head towards Benteke, who responded by pushing the Spurs player in the face. Swarbrick will feel that he had little option but to show a red card but it was soft.

Villa looked like they might still hang on but Chadli, arriving at the far post unmarked, was able to turn in Lamela’s corner from inside the six-yard box before Kane, with a deflected free-kick from 25-yards, secured Spurs only their second league win in eight matches.