Tubbercurry man scored 86 goals in 531 appearances for the club 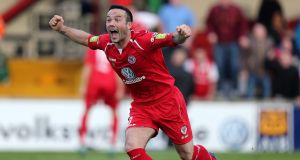 Raffaele Cretaro has announced his departure from Sligo Rovers with the 37-year-old confirming that he has played his last game for the club after a remarkable 17 seasons.

Cretaro played a key role in Rovers’ title-winning campaign of 2012 and helped the club to the FAI Cup twice – he scored the winning penalty in the 2011 shoot-out against Shelbourne – as well as the Setanta Cup.

He had two seasons away, one with Galway United and another, at the height of his career, with Bohemians, but quickly returned home on each occasion and rejected a couple of opportunities to move to Britain.

In the end, he played 531 games and scored 86 goals for the club despite having spent a good portion of his time well away from the forward line, something evidenced by the fact that he won a Young Player of the Year award early on while featuring at right back.

“Whenever someone mentions Sligo Rovers, it is often quickly followed by the name Raff Cretaro,” said club chairman Martin Heraghty is a glowing tribute. “He is the personification of our football club.

“In the early years, in the First Division, he provided the light that there would be a better future for us all of us one day. That came and each time Raff would step up a level when the club did. He turned into the most feared striker in the league for a period, which was all the more remarkable given that we had to use him in every position in the team!

“Some goals stick out; the winning penalty at the Aviva Stadium and that incredible piece of magic in 2012 against Pat’s (the 3-2 win in which Cretaro had given Rovers a 2-0 first-half lead). The Showgrounds had never seen a moment like it.

“In tougher times, you knew he would be going out there too. He knew where his heart lay. On behalf of the club I’m so grateful for his sacrifices, and to his family as well as they kicked every ball with him.”

Creataro himself said that it had been his dream to play for Rovers as he drew up in Tubbercurry. He signed just after leaving school.

“I have amazing memories that will stay with me for my entire life,” he says. “It has been so much of my life since I made my debut in 2000. I was a local lad who wanted to play for my local club and be the best player I could.

“As I speak about it today I could talk about all those wonderful days. The game against St Patrick’s Athletic to win the league title and scoring two goals. Everything was perfect that day. The drama and the euphoria. It was a fairytale.

“The FAI Cups, the great teams, the unbelievably talented team-mates, inspirational managers, the dedicated people around the club and the passionate supporters who live and breathe Rovers and make it what it is.

“There is a little bit of sadness that it’s over now as a Sligo Rovers player,” he continued. “I will move to part-time football elsewhere shortly and that’ll suit me at this stage in my career. Those games are Friday nights. On a Saturday I can say you’ll very likely find me in The Showgrounds with my son Matteo supporting the team again.”