Arsenal miss out on Champions League despite Everton win 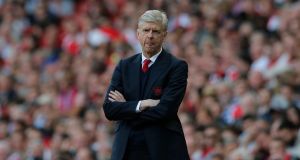 Arsene Wenger saw his Arsenal side beat Everton but miss out on Champions League football for the first time in his tenure. Photograph: Andrew Couldridge/Reuters

Another day at the Emirates Stadium; another mutiny to reflect the bitter frustration among the Arsenal fanbase. This time, the target was not Arsène Wenger, the beleaguered manager but Stan Kroenke, the majority shareholder. “Stan Kroenke, get out of our club,” was the cry from the hour mark, and it had a series of airings, each one louder than the previous.

This was a seismic occasion in the club’s modern history. Nobody really expected Liverpool or Manchester City to slip up and allow Wenger and his team the chance to nip in and secure a place in the top four, and they did not. And so, for the first time since 1997-98, Wenger and Arsenal must move into a season without the spur of participation in the Champions League.

Arsenal did what they had to do on the field – even after Laurent Koscielny was sent off in the 14th minute for a crazy challenge on Enner Valencia. The captain will be suspended for Saturday’s FA Cup final against Chelsea while Gabriel Paulista will surely be missing, too. The centre-back was carried off in obvious distress after jarring his left leg.

Arsenal led through Héctor Bellerín and Alexis Sánchez and, although Everton pulled one back through Romelu Lukaku’s penalty, the home team deserved their victory, despite a few wobbles. Aaron Ramsey sealed it with a beauty in stoppage time, curled unerringly into the far top corner.

Yet the Kroenke Out sentiment was the underlying theme of the afternoon and it followed the publicising of his decision to reject a takeover bid worth £1bn from Alisher Usmanov, who holds a 30 per cent stake in the club. Arsenal still have the Cup final to play and they are finishing with something of a bang but there can be no mistaking the unhappiness at the end of a Premier League campaign that has to go down as Wenger’s worst and most trying.

He had promised that his team would fight until the last and they scored early on. It was a first goal of the season for Bellerín, who was in marauding mood at the outset, and it served to spare the blushes of his team-mate, Danny Welbeck, who had contrived to miss his kick from two yards out, following Mesut Özil’s cross from the left, and with an open goal gaping.

How did Welbeck miss? Bellerín did not hang around to wonder. The ball had squirted back to him off Welbeck’s heel and he shot into the still empty net. It had been a fast start by Arsenal, with Alexis Sánchez buzzing and probing and Özil prominently involved. Bellerín had crossed in the second minute only for Welbeck to divert wide.

The red card changed the tone of the afternoon and it followed a reckless decision from Koscielny. He was, clearly, convinced that he would get to the ball first, as he moved across and Valencia burst away, but he was wrong and the consequences were huge.

Koscielny went through the Everton forward with his side-on slide tackle and it did not matter that there looked to be no malice in it. The challenge was late and there is no leeway when a defender gets it wrong like that. Koscielny will be banned for the FA Cup final and it will be interesting to see whether it influences Wenger’s decision on whether to play Petr Cech or David Ospina in goal. Cech took over the captaincy from Koscielny here but Ospina has played in the Cup this season, when fit.

It was a pulsating first half and Ronald Koeman made a change on 26 minutes in an attempt to press home Everton’s extra man, sending on Ross Barkley, who had been surprisingly omitted from the starting XI or, perhaps, it was not that surprising given the stand-off over the midfielder’s new contract.

Moments later, Arsenal extended their lead and it was a bizarrely simple goal, after Sánchez’s shot had hit Phil Jagielka and broken to Welbeck. Jagielka stayed down, Sánchez moved towards the six-yard box, nobody tracked him, Welbeck squared and Sánchez side-footed home. Sánchez worked Joel Robles with a free-kick and while the Liverpool game remained goalless, Arsenal could hope.

The closing stages of the first half were defined by Everton pressure and there was one moment of pinball inside the Arsenal area that finished with Cech clutching the ball in front of Lukaku. The Arsenal goalkeeper was further extended by Idrissa Gueye and Lukaku while the latter also dragged a shot wide. The hammer blow for Arsenal, however, was the news at the end of the half that Liverpool had gone in front.

By the time that Liverpool scored their second and third goals, the mood inside the Emirates had darkened. After Robles had made a double save to deny Welbeck and Özil, there was misery for Gabriel, who stretched into a tackle on Valencia only to get his left leg struck under his own body.

It looked nasty and he was taken from the field on a stretcher – his Cup final dreams surely in tatters. To add the insult, Michael Oliver booked him for the lunge at Valencia and there were moments when the referee struggled to keep control. Oliver was correct, though, to award Everton’s penalty, after Nacho Monreal leaned towards Leighton Baines’s cross with his arm. Lukaku guided his kick past Cech.

The anti-Kroenke chants started on the hour mark and they underscored the occasion. Lukaku had a goal ruled out for climbing on the substitute, Per Mertesacker, while Özil and Alex Iwobi, twice, could not finish. Ramsey showed them how but, by then, the attention had turned to off-the-field conjecture.