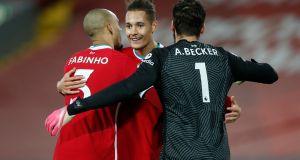 Fabinho has been in excellent form for Liverpool this season. Photograph: Getty Images

Liverpool star Fabinho admits a second Premier League title would be more special than the first as it would put Jurgen Klopp’s side “further in to football history”.

The Reds ended a 30-year wait to be crowned champions of England in July with a whopping 18-point advantage over Manchester City.

Liverpool have made light of injury problems this season to hold a four-point lead over Christmas in the chase for successive titles.

“This team will be remembered for how well we play, the quality of our football and for winning the title,” Fabinho said in an interview with the Daily Mail.

“But to fight for the second one would put us further in to football history. It would put us up there with teams in the Premier League that have won back to back titles. Teams like Manchester City.

“It would put us on the higher level and put us with the best teams in the history of the league.

“Taking into account everything that has happened this year, the difficulties of no fans in the stadiums and the busy run of fixtures and injuries we have had, it all adds to making the second title more special than the first one if we could do it.

“It would show that we have this constant desire at the club to be winners.”

Long-term injuries to Virgil Van Dijk and Joe Gomez has forced the Brazilian midfielder to drop deeper into central defence.

Yet the 27-year-old has hardly put a foot wrong since Liverpool’s last domestic defeat, the 7-2 horror show away to Aston Villa at the start of October.

Fabinho said that plans for him to play at the back had been in operation almost from the day he arrived at Liverpool in July 2018.

“Back then the coach saw the need for someone to be available so I started working on that position, getting used to it, working with potential partners,” said Fabinho, who is set to make his 100th Liverpool appearance against West Brom on Sunday.

“We had three centre-backs at the time so it was all just a test for me, just to be prepared. The coach had identified that there could be a need further down the line.

“So when I came in I felt good and comfortable and over time it’s got easier.

“When Virgil got injured I expected to come in as centre-back and even the other players were joking. They were saying: ‘Fabinho the defender is back, he is here’.

“Yes I was nervous at first but I think I have grown in to it.”

Meanwhile Klopp insists he does not keep count of the goals his players score as he views their contribution in more rounded terms.

Klopp admitted he had no idea Sadio Mane’s goal against Crystal Palace last weekend was the Senegal international’s first in 10 matches. That is because he sees the value of what else players like Mane offer, in much the same way as he defended Roberto Firmino’s paltry 2020 goalscoring record just as the Brazil forward scored three times in two matches.

When Mane’s recent record was put to him Klopp said: “I didn’t even know it.

“Honestly I would have lost everything if I had to bet on it how many goals Sadio Mane scored in the last 10 games.

“As one option to answer it would have been the last one I went for, he only scored once.

“A second ago we spoke about the brilliant goal difference and now I realise one of our best players, one of the best players in the world, didn’t score for a while. Who cares?

“He played exceptionally well, is in really good shape, he is unbelievably difficult to defend. If Sadio has the ball as an opponent you need to put three players on that side and it opens up a lot of things.

“I was not concerned but scoring is, for the boys, really important. Bobby obviously liked it when he scored two weeks ago and since then he scored three or four goals and if Sadio starts scoring I have no problem with it.

“It was not about his performances, they were really good.”

New West Brom boss Sam Allardyce is the next man who has to deal with Liverpool’s fearsome forward line.

The 66-year-old was the last manager to beat Klopp’s side in a league match at Anfield when he was in charge of Palace in April 2017. Since then the Reds have put together a run of 66 Anfield games without defeat, which includes a remarkable 55 wins.

Klopp does not know exactly what to expect from the Baggies in Allardyce’s second match in charge but he has a fairly good idea.

“It’s a tricky one. We made the analysis. It is a mix of when Sam was at Everton and the last game — his first game against Aston Villa,” said Klopp.

“What I expect is a tough opponent, it is always tough against Sam Allardyce teams: well organised, don’t make a big fuss of possession and the situation West Brom are in any way it will be a proper fight and Sam is a proven specialist for organising teams for these kind of fights.

“We expect a tough game obviously.”