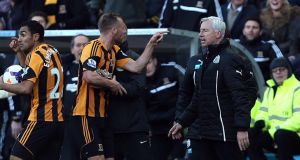 Newcastle finally broke Hull’s Indian sign over clubs from the north-east as a Moussa Sissoko brace helped the visitors to a 4-1 win at the KC Stadium, but the game was overshadowed by a second-half flashpoint which could well result in the English FA coming down hard on Magpies boss Alan Pardew.

Sissoko opened his account after just 10 minutes, sweeping home first time after a counter-attack, and then took the game away from the Tigers with his second, minutes after Curtis Davies’ header had given the hosts hope at 2-1.

Newcastle’s second was a gift from Maynor Figueroa, the defender’s criminally under-hit back-pass allowing Loic Remy to gallop clear to score into an empty net after rounding Allan McGregor, while Vurnon Anita made it four in injury time.

But the game’s main talking point arrived on 72 minutes when Hull midfielder David Meyler barged into Pardew as he looked to retrieve the ball for a throw-in.

The Newcastle manager, no stranger to touchline altercations, squared up to Meyler before appearing to move his head in the direction of the Irishman. Referee Kevin Friend certainly viewed it as a serious incident and sent Pardew to the stands, with the FA sure to take a close look at the altercation in the coming days.

The mood at the KC had earlier been one of confidence at kick-off, and with good cause given Hull’s record against teams from the north-east this season, with their league double over Sunderland having been supplemented by a thrilling 3-2 win over Newcastle in the first meeting in September and victory over Middlesbrough in the FA Cup.

Adding to the feel-good factor were the recalls handed to in-form strike duo Shane Long and Nikica Jelavic, the January signings having been cup-tied for the Tigers’ FA Cup win over Brighton on Monday. Tom Huddlestone, Alex Bruce and Liam Rosenior also featured as Steve Bruce reverted to the starting line-up from last weekend’s 4-0 win at Cardiff.

Despite their poor record in this fixture it was Newcastle who started the brighter and came close to opening the scoring in the fourth minute when Yoan Gouffran took aim with a strike from 20 yards that drew a dive from McGregor but was always drifting wide.

Hull’s first foray into the opponents’ half nearly ended in a goal when Huddlestone’s free-kick found Bruce at the back post but his header from point-blank range was somehow kept out by Tim Krul, who then denied the Hull defender a second time.

And Hull’s frustration was doubled within 30 seconds as Newcastle broke quickly, the ball eventually coming to Mathieu Debuchy down the right whose low pull-back was met with a sweet first-time effort from Sissoko beyond the helpless McGregor.

Hull very nearly had an equaliser in the 36th minute when Long did well to draw a foul 20 yards from goal, rolling away from his marker before being brought to ground. Jelavic stood over the set-piece but saw his effort come back off the crossbar.

The hosts’ first-half frustrations continued as Huddlestone’s fine ball down the channel was collected by Long, who twisted his man to create space before delivering a deep cross to the back post where Elmohamady headed wastefully wide.

And Hull’s combination of ill-fortune and wastefulness in front of goal bit them again three minutes from the break when Figueroa inexplicably under-hit a pass-back which was seized upon by Remy, who rounded McGregor before slotting into an empty net.

Hull needed a speedy response at the start of the second half and that is exactly what they got as they immediately pulled one back. Huddlestone’s free-kick was delivered into a crowd of players on the edge of the six-yard box, with Davies hanging in the air and nodding beyond Krul who got a fist to the ball but could not keep it out.

Yet Hull’s hopes of a successful fightback were dashed within moments, a loose touch by Huddlestone in midfield inviting Sissoko to lead the breakaway. His pass picked out Gouffran who drilled a low shot that was only parried by McGregor, and it was Sissoko, smartly continuing his forward run, who lapped up the rebound.

Hull struggled to mount a response in what time remained and Newcastle saw Remy and Gouffran both go close to adding to the scoring before Anita added the gloss with a fourth in injury time.

But the second half, and the match, were overshadowed by Padrew’s ugly clash with Meyler inside the final 20 minutes which sadly will stand as the overriding memory of an otherwise thoroughly entertaining contest.