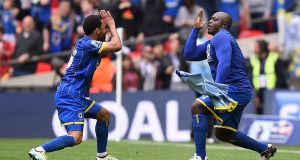 If the film script had already been written, it may need ripping up now.

Last month it was announced AFC Wimbledon will be the subject of a Hollywood film, and while their 14-year history has provided more than enough to enthrall they have just provided the most remarkable ending of all.

Lyle Taylor’s instinctive flick 12 minutes from time and Adebayo Akinfenwa’s late, late penalty settled a scrappy, at times frantic League Two play-off final that they had shaded throughout and means Neil Ardley’s team, who have now won six promotions since 2004, will play League One football next season. Their opposition will include MK Dons and amid raw, emotional scenes it was hard to avoid getting swept away by the thought that, sometimes, history has a way of putting things in order.

For both sets of supporters, this felt like an awakening. Nearly 35,000 had travelled from Plymouth, the din they produced from the stadium’s east side perhaps sourced from an awareness that, back in 2011, they might not have had a club to follow at all at all. Wimbledon were dwarfed in number but even then the sight of their massed ranks was a throwback, blue and yellow colours dusted down by fans for whom this, an event whose like they may never have expected to see again, was guaranteed to stir hearts and memories.

These sides beat one another on opposing territory during the regular season and began evenly on neutral ground. A hefty aerial challenge by the Plymouth captain Curtis Nelson on Tom Elliott served notice that little would be shirked but the Wimbledon striker made his own impression shortly afterwards, winning a header from which his strike partner Taylor had a cross-shot deflected into the side netting.

When Elliott won another aerial exchange in the 21st minute, Taylor was sharply in ahead of Peter Hartley but not before the Plymouth goalkeeper Luke McCormick. Taylor’s follow-through, which could generously be termed an unintended consequence of his momentum, sent McCormick flying and raised the temperature briefly, too.

WATCH: Akinfenwa says he's technically unemployed. Any manager's fancy giving him a job? Hit him up on WhatsApp. https://t.co/wcxVrZExMh

It was a sequence in keeping with the early exchanges’ skittish nature but Elliott, unmissable at 6ft 4in, was causing regular problems by now and a far-post header shortly afterwards drew a vital intervention from Kelvin Mellor. There was another nod-down for a blocked Connor Smith shot and, while Plymouth seemed marginally the more deft, Wimbledon’s athleticism was imposing itself to greater effect.

Plymouth had not got going. Their Irish playmaker, Graham Carey, was the subject of adhesive-like attention from Dannie Bulman and, with his impact nullified, the threat had to come from wide. It did, eventually, when the left-winger Gregg Wylde outstripped Smith and produced a dangerous cross that Darius Charles diverted away from the poised Jamille Matt.

That was a rare example of a threatening final delivery. When Wylde drove forward in a more central position shortly before half-time, his attempt to feed the ball wide found only the touchline. It had been that kind of half: a frenetic, rushed affair in which the priority was not to risk too much at either end.

Then Plymouth midfielder Carl McHugh did dice with danger three minutes into the second period, the Donegal man getting his bearings wrong 35 yards from his own goal and seeing his looped miscue drop narrowly wide of McCormick’s left post.

You expected the intent to raise a notch now, with both sides shooting towards their own support, and Elliott was not far from getting his head on to an inswinging Andy Barcham cross.

Wimbledon’s tails were up and next it was Taylor, who had reached the left byline, delivering accurately for Elliott to head over. There should certainly have been more end product when Bulman, a Barry Fuller ball having released him from his shackling duties, got behind the Plymouth defence but failed to locate Elliott.

Carey finally offered evidence of his prowess 65 minutes in, Kelle Roos batting away a 30-yard free-kick to his left, but Bulman found himself in another advanced position shortly afterwards, again undercooking a centre towards Elliott.

Akinfenwa had been signing autographs as the teams emerged for the second half in what was a reflection of his – relative – box-office draw here. He was finally more gainfully employed in the 77th minute, replacing the tiring Elliott. “Beast! Beast!” chanted the Wimbledon fans, portentously.

Maybe they knew something. With his second touch of the game, Akinfenwa won a challenge in a move that earned Wimbledon a corner. Callum Kennedy’s right-sided delivery was cleared and worked back to him; his second attempt was a low inswinger and Taylor, showing the instinct that already yielded 22 goals this season, darted in front of his marker to send the ball across McCormick with the cutest flick of the boot.

Fuller and Akinfenwa both had chances to follow suit before the end while Taylor fluffed a one-on-one, but the big striker was able to put his seal on things in the final minute of added time after Adebayo Azeez was fouled.

Sam Bennett: ‘A green jersey in the Tour de France is such a highlight of my career’ 07:30
If soul-searching was a sport, today’s GAA teams would all be champions 06:00
Matt Williams: The sky is not falling in on Irish rugby - but Ireland do need a new plan 06:00
Superfan John Murphy keen to keep streak going and make it 80 not out in Donegal 06:00
Miss Amulet looking to complete rags-to-riches success at Newmarket 06:00

1 Kevin Babington: Learning to live again after life changed forever on Long Island
2 Matt Williams: The sky is not falling in on Irish rugby - but Ireland do need a new plan
3 Weekend Club GAA previews: Kerry football and Kilkenny hurling deciders top bill
4 Every yellow jersey winner must still feel guilty by some association
5 Sam Bennett: ‘A green jersey in the Tour de France is such a highlight of my career’
Real news has value SUBSCRIBE