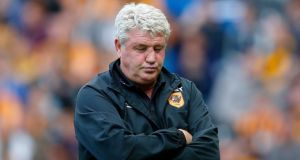 Hull City manager Steve Bruce looks dejected after his side was relegated at the KC Stadium yesterday. Photograph: Andrew Yates/Reuters

When the final whistle went a prolonged standing ovation was offered despite the side’s fate, a spectacle that was refreshing to witness and suggests Bruce retains the support of the club’s core constituency.

As his players wandered across the pitch to return the fans’ applause, Bruce shook hands with United players, offered his own applause to the faithful and then walked off down the tunnel to end a particularly bitter experience for the manager.

Of the reception given to his team, Bruce said: “It’s a huge thanks from me. It might sound hollow but it’s not. They’ve not had much to shout about. I know how much it means to them – a lot find it difficult to fork out the money.”

By the end, this draw meant an inquiry into how and why relegation had been suffered should start.

Bruce gave one telling reason, saying: “Nearly 50 per cent of the games we’ve played, we’ve not managed to score. That’s given us too much to do. It’s a pretty damning statistic.”

While the precise number is 17 of the season’s 38 league matches, Hull had not defeated United for 41 years, when Malcolm Lord and Ken Wagstaff scored the goals to record victory in the Second Division on November 23rd, 1974 , at Boothferry Park, their former ground.

A further unwanted portent could be found in the 1-0 loss here to United six years ago when Hull entered that final afternoon also in a relegation dogfight, though they stayed up that time as Newcastle lost at Aston Villa. Also, Bruce had never managed a side to a win over United from 21 previous attempts.

Hull began and ended the afternoon taking no heed of this. There was a sharpness and grim determination to put up a fight. The sell-out KC Stadium helped, creating a buoyant atmosphere that was more akin to an end-of-year-party than the nerve-shredding occasion that would close in despair.

Hull were quicker, faster and hungrier than a Louis van Gaal team which had Victor Valdes making his full debut in place of the injured David de Gea. By half-time, Valdes had been beaten twice, though the efforts of Paul McShane and Stephen Quinn were ruled offside. This brought cries of anguish and frustration from the home support.

At stake, of course, for Hull was a slice of the new £5.14 billion (€7.2 billion) TV deal that pays the bottom club a difficult-to-comprehend £99m, substantially up on the current £55m.

In purely football matters being one of the elite 20 also helps attract the best players for the first-team squad, and further down the line too. Nine days ago the Hull academy was recommended to receive category two status.

For Bruce – if he remains in charge – the job now is all about regrouping: it will not be easy. Guardian Service

1 The Offload: Ireland are stuck in no man’s land
2 Nicky English: Galway and Waterford face battles with fatigue in All-Ireland semis
3 Every kind of wind imaginable was against Tipperary football - and they came through
4 Ken Early: Roles have reversed for Guardiola and Mourinho
5 Tipperary and Cavan deliver two earthquakes in one day
Real news has value SUBSCRIBE