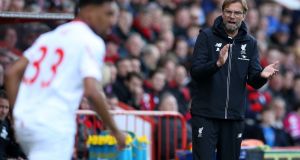 Jurgen Klopp has dismissed suggestions there are “problems” in his relationship with Jordon Ibe and insisted the young winger has a promising future.

The talented 20-year-old impressed throughout Liverpool’s 2-1 Barclays Premier League victory at Bournemouth on Sunday, displaying fine footwork on the left wing and providing the cross from which Daniel Sturridge headed their second goal.

His appearance was only his third since February, however, despite their intense schedule, and came after he had featured regularly from Klopp’s October appointment until then.

Suggestions persist that a rift developed between the two over what Klopp perceived to be an unwillingness to track back and defend, but having watched him re-establish himself as a first-team option against a below-par Bournemouth, the German praised his “big talent”.

“I heard from somewhere that Jordon has some problems with me or something?” said the 48-year-old, whose ability to nurture young players was crucial to his success as Borussia Dortmund manager.

“Only a few young players can come up, and sometimes they are in the squad, sometimes not.

“He’s still a brilliant, big, big talent which is very good for English football. He did well with the pass for the first goal, and the cross for the second. I was very happy.

“It was a beautiful pass from Jordan Ibe (for Sturridge’s goal). We had a lot of moments and it’s absolutely exciting.”

On the evidence provided by their poor performance on Sunday, Bournemouth have relaxed since last month’s 3-2 defeat of Swansea took them to the brink of securing their Premier League status.

They have won only once since then — away to the consistently poor Aston Villa, who are the only team so far to be relegated to the Championship — conceding 10 times in four games.

Manager Eddie Howe, however, though critical of their performance, stressed that in what could have been a difficult season, their success should not be overlooked.

“To get over 40 points has probably been our biggest achievement to date, but my focus has to be on the here and now, and I’m disappointed (with Sunday’s result),” he said, having also given substitute Callum Wilson his first home appearance since he injured his anterior cruciate ligaments at the season’s start.

“We just want to protect (Wilson) at this moment and nurse him back, that was a nice step up and workload for him. But he’s looking good.”

Meanwhile Everton manager Roberto Martinez does not intend to rest Everton players for Wednesday‘s Merseyside derby against Liverpool - even though it comes just three days before an FA Cup semi-final with Manchester United.

Martinez, confronted by a furious supporter during Saturday‘s 1-1 home draw with Southampton, is under increasing pressure from fans after erratic performances in the league this season left the club 11th in the table.

“I don‘t think you can switch on and off,“ Martinez told reporters when asked whether he would prioritise the United game with his team selection for the match away to Liverpool.

“You have to perform well before you go to a semi-final. You can‘t just say: ‘OK, let‘s switch it on. We are going to play well.‘ It doesn‘t work like that. You have to create a competitive nature in every game you go into.“

Manchester United are also in Premier League action on Wednesday when they host Crystal Palace.