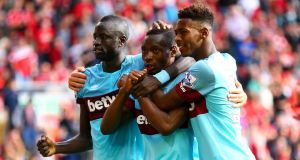 West Ham ended one of the longest winless runs in top-flight history with their first victory at Anfield in almost 52 years as Liverpool’s defensive problems returned to haunt them in spectacularly bad style.

The curse of the manager’s press conference came to the fore as after praising the new defensive stability which brought three clean sheets, Brendan Rodgers saw his side concede the fastest goal of the season so far to Manuel Lanzini inside three minutes.

Rodgers had also championed Dejan Lovren for overcoming his problems in his maiden season and showing he could be a “top-class” centre-back but the €27.5 milion Croatian repaid his manager’s praise with a disastrous piece of defending to allow Mark Noble to score.

The West Ham captain was harshly sent off late on, after Liverpool’s Philippe Coutinho had already been shown a second yellow card, but Diafra Sakho made it 3-0 in added time and 18,978 days after Geoff Hurst and Martin Peters — before they were World Cup winners with England — scored at Anfield, the Hammers had their long-awaited victory.

It was celebrated long and loud by the visiting fans and rightly so as the last time they had the chance to do so the Beatles had just achieved their second number one with She Loves You and a 17-year-old Northern Irishman called George Best had made his Manchester United debut.

As if that was not enough, Coutinho, already cautioned for dissent, was sent off when he slipped trying to close down Dimitri Payet and brought down the midfielder with his body.

It means the influential Brazilian playmaker will miss Liverpool’s visit to Old Trafford when the Premier League resumes after the international break.

None of which will matter to West Ham, who were full value for their two first-half goals.

The lively Lanzini had a hand in both, sneaking in front of youngster Joe Gomez to turn in Aaron Cresswell’s low cross-shot before then totally embarrassing the hapless Lovren.

Lanzini, considerably smaller and lightweight, outmuscled the 6ft 2ins international out by the touchline and although the centre-back managed to recover possession, he then messed about near the byline and was robbed again as his tormentor crossed for Noble to drive home, whose afternoon was spoiled late by the bizarre decision of referee Kevin Friend to send him off for a challenge on debutant Danny Ings.

Roberto Firmino came closest for a shot-shy Liverpool, crashing a 25-yard effort against the post in the first half on the way to their first defeat of the campaign.

1 Betting shops face uncertain future as they prepare for Monday reopening
2 Ian O’Riordan: An education in race and running during college days in America
3 The Irish Times shutdown sports quiz: Part three
4 Timo Werner giving up on Liverpool dream on path to being truly wanted
5 Tianna Bartoletta: ‘After you’ve gotten your medal, you become black in America again’
Real news has value SUBSCRIBE