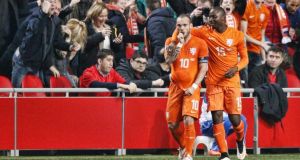 Wesley Sneijder does a “baby celebration” with Jetro Willems after Klaas-Jan Huntelaar’s late equaliser for the Netherlands against Turkey in the Euro 2016 qualifier in Amsterdam last week. Photograph: Epa.

Johan Cruyff refused to wear their blazer. He just wouldn’t put it on. And some said it came down to that. It was the final straw.

Cruyff and the Dutch Football Association (KNVB) were in discussions about Cruyff taking over the Netherlands team that had just reached the 1994 World Cup finals in America.

KNVB had sportswear sponsorships, as did Cruyff. He was manager of Barcelona at the time and would be taking a six-week secondment to oversee Holland in the USA.

The mooted compromise was that Cruyff would not be required to wear the sponsored KNVB training kit but that he could not wear what he wore in Barcelona and would don the association blazer. Cruyff said no.

While there were rather more significant issues – such as contracts and cash – the blazer has gone down as an example of the sometimes brilliant, sometimes idiosyncratic nature of Dutch football.

It is a seductive image – Dutch non-conforming genius – and maybe we fall too quickly for it. Then again, when it comes to someone like Cruyff or Ruud Gullit, our willingness to swoon originates in their excellence. Without that we wouldn’t listen. Ultimately the KNVB stuck with Dick Advocaat, who can wear a blazer, who can conform.

Advocaat had worked for the KNVB from 1984 as Rinus Michels’s assistant and in 1994 it seems harsh on him that he would have been ejected from the top job having guided Holland to America. But Dutch progress to the finals had not been glorious. They qualified behind Norway. At least Graham Taylor’s England had been pushed into third place, and spawned the “Do I not like that” documentary, but a crack had opened in Advocaat’s tenure during Holland’s 2-2 draw at Wembley in April 1993.

The result was a good one for the Dutch, who had been 2-0 down. Then Dennis Bergkamp pulled one back and with five minutes to go substitute Peter van Vossen scored a penalty.

Van Vossen had only been on the pitch for 15 minutes and the problem was the man he replaced: Gullit. Gullit did not see the equaliser because he avoided the Holland bench and made the long walk to the Wembley tunnel. In the visitors’ dressingroom he would inform Advocaat he was retiring from international football.

Gullit was 30 and was approaching the end of his trophy-laden six years with AC Milan. During that period he had also captained the Netherlands to the 1988 European Championships, having been voted European Footballer of the Year in 1987. He was brilliant, now he was idiosyncratic.

Advocaat accepted Gullit’s decision but, pressed by a media campaign, invited Gullit back a year later. Gullit agreed, and played in the final warm-up before America against Scotland.

Gullit had joined up with the Dutch camp but wasn’t happy with it. He, like many other players, wanted Cruyff in charge. But the blazers couldn’t make it happen, so Advocaat it was.

Unimpressed by this, and by Advocaat’s proposed tactics in high humidity, Gullit called a press conference at the team hotel and said he was off. He was. He never played for Holland again. What a waste.

Holland needed an 86th-minute winner to beat Saudi Arabia in the first game at the finals, then lost to Belgium. They scraped past Morocco to meet Jack Charlton’s Republic of Ireland in Orlando. After that, Holland lost to Brazil in the last eight.

With Gullit they might have won the World Cup outright. Had they done so, would the Dutch implosion of Euro 96 have happened? No wonder a blazer assumes symbolism.

There was a sense of an opportunity lost in 1994. Holland had Bergkamp, Rijkaard, Koeman, Overmars, the De Boers, some worthy successors of Cruyff. Gullit called it “a team full of world-class players”, hampered by “little tactical flexibility”. Systems and individuals. That is a black-white exaggeration of a divide but the broad assessment returns when watching a game like last Saturday’s grim 1-1 draw v Turkey in Amsterdam.

At a time when Dutch coaching influence in England is growing – Van Gaal, Koeman, Advocaat – the national team is regressing. Cruyff said the performance “hurts the eyes”.

It certainly confused them. The Dutch were so bad – in an over-coached way – you could understand why they are third in their group behind the Czechs and Iceland. They are five points behind the latter and may not make France even in 2016’s expanded format. Sideways-back-sideways for about 80 minutes, there was no brilliance, no spontaneity. Holland eventually plumped for route one a la Louis van Gaal at Lansdowne Road in 2001.

It worked, in that Klaas-Jan Huntelaar got an injury-time equaliser, but the goal was a deflected shot. It hit Huntelaar on the back and the man whose shot hit him, Wesley Sneijder, then revealed his priorities by running to a ball-boy to get a ball to stuff up his jumper so he could do a “baby” celebration.

Sneijder is a fine player, with 113 caps – one less than Cruyff and Gullit combined. But is this what passes for Dutch idiosyncrasy today? It made you wonder if Dutch football has become a prisoner of systems.

A response to that charge is that it is only nine months since Van Gaal led Holland to the World Cup semi-finals. Another is that Arjen Robben was missing last Saturday. The reply to that is that for chunks of time in Brazil, Holland were, well, boring. Robben is 31.

The nation of Cruyff and Gullit looks like a dull man, lost, wearing a blazer.

RODGERS AND LIVERPOOL CONTINUE ON THEIR ROLLER COASTER RIDE OF SEASON

It seems longer than a fortnight ago but in expectation of Liverpool beating Manchester United and leapfrogging them into fourth in the table, there were well-informed articles dropped into the English papers outlining just where it had all gone right for Brendan Rodgers.

Then United went and won 2-1, Steven Gerard got himself sent off and an assumed one-point advantage for Liverpool became a five-point lead for United.

By 5pm on Saturday, should United beat Aston Villa and Liverpool lose at Arsenal, then the gap between Rodgers’s team and Louis van Gaal’s would be eight points (nine on goal difference) and Rodgers will suddenly find that next Wednesday’s trip to Blackburn in the FA Cup becomes charged.

This is football’s fabulous ability to be brutal: a fortnight ago projections concerning Rodgers included “future England manager”; lose at Arsenal and by Blackburn some Liverpool fans will be bringing up FC Basel and Besiktas.

Leinster look ready to step things up and burn off Saracens challenge 06:00
Misfiring Ulster facing a torrid time in Toulouse 06:00
Etneya win at Gowran would prove a fitting tribute to Smullen 06:00
O’Sheas and Breaffy looking to take final step to a first Mayo senior title 06:00
Paul Galvin’s Wexford departure takes a little of the shine off things 06:00

1 Rory McIlroy battles to stay in the mix as Patrick Reed leads the US Open
2 Born to ride, born to win: Sam Bennett, the making of a green machine
3 Leinster look ready to step things up and burn off Saracens challenge
4 O’Sheas and Breaffy looking to take final step to a first Mayo senior title
5 Will Connors now delivering on his massive potential
Real news has value SUBSCRIBE
Crossword Get access to over 6,000 interactive crosswords