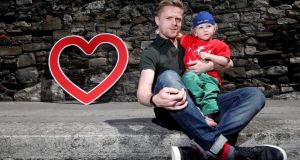 Damien Duff turned down the opportunity to be presented with an Ashley Cole style “golden cap” on the pitch at Wembley last week, he has revealed, with the Fulham star observing good naturedly that he is happy with the one he got from John Delaney in a Heathrow bar six months ago.

“Roy Hodgson rang me two weeks ago,” he revealed while in Dublin yesterday for the presentation of 35 Coagu-Chek machines by the charity Heart Children Ireland to the Mater Hospital’s Maurice Neligan Congenital Heart Clinic, “and he offered me to get my 100th cap presented to me on the pitch at Wembley against Ireland last week but I was like ‘gaffer’ - I still call him gaffer – ‘no chance, you must know me by now. It’s not going to happen.’ As much as it would be something to look back on, it wasn’t for me.”

Different way
Anyway, he added, “I got it in a different way. I bumped into John Delaney in a pub in Heathrow Airport and he said: ‘Fucking hell Duffer, funny I should bump into you’. He had the cap on him, he was supposed to meet me in London but he never tracked me down. So I had a pint of shandy looking at my 100th cap . . . some way to bow out.”

Duff’s involvement with Heart Children Ireland stems from his eldest child Woody having been born with a partial AVSD, essentially a hole in his heart, a problem that was addressed by surgery from which the now two-year-old has made a complete recovery.

The timing of the Dublin trip, he admitted, had nothing really to do with last night’s game against the Faroes although Duff, who played 100 times for his country, was hoping to get both of his kids down in time to watch it on TV, possibly, he joked, with the help of some Calpol.

Duff, who, still says he will move home and finish his career in the League of Ireland over the next few years, suggested it was “hard to say” whether he misses the international scene although he admits he has only been to one game since; the one against Oman at Craven Cottage last year.

Struggle
And he doesn’t see too many of them on TV either. “I struggle when I am back in England as I don’t have Sky, there’s a recession on.”

That much will, of course, be less of an issue in relation to Ireland matches when he moves back to Dublin although he is no hurry. “I have a year left at Fulham, and I love it there, I would love to stay on playing there for a few years; it has been a special place to me.

“After that in England? I don’t know (but) obviously I am going to move back here. My wife (Elaine) is Irish and my two kids are Irish and they are going to go to school here. And, as I have said before, if there is anybody who will take me . . . ”

Somebody mentions Shamrock Rovers, who would be in what would have been his general neck of the woods, and he laughs. “I dunno, I played against them before and they gave me a bit of stick. We have a few issues, me and the fans!

“Anyway, that’s the plan and I definitely want to come back and do it. We’ll see what happens.”