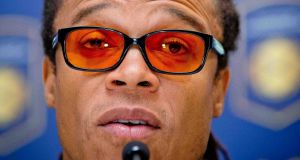 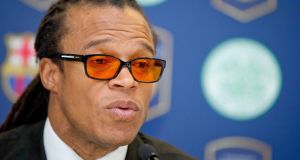 Edgar Davids was in Dublin for the launch of the International Champions Cup. Photograph: Inpho

A good few fans may be weighing up whether it is worth finishing fourth if it means Louis Van Gaal might stick around another year, but one of the Dutch stars whose career the Manchester United manager launched back in his days with Ajax insists the Premier League outfit will be the better for his old mentor’s time at Old Trafford, even if the 64 year-old has not filled the trophy cabinet with silverware.

Van Gaal gave Edgar Davids his Ajax debut within weeks of becoming that club’s first team coach back in 1991 and the midfielder helped the club to three league titles before moving to Italy, where he won another three.

“That is what Van Gaal can do,” says Davids, of the coach’s ability to pluck talent from a club’s underage sides then propel it towards greatness. “If you look at most youngsters, they have worked well under Van Gaal. At Bayern Munich, before Van Gaal, I’d never heard of (Thomas) Muller and now Muller is one of the best players and so on and so on.

Davids, now 43, was speaking at the official launch in Dublin yesterday of the Irish end of the International Champions Cup, a conglomeration of pre- season friendlies packaged into a tournament by its US backers.

The event will involve 15 clubs playing in cities across America, Europe, Asia and Australia, with Celtic taking on Barcelona at the Aviva Stadium on July 30th and, the organisers said yesterday, a game between Celtic and Inter Milan at Thomond Park on August 13th to be confirmed in the coming days.

“We’ve been involved in organising friendly games for a long time,” says Charlie Stillitano of Relevant Sports, the promoters, “but what we’ve found is that once you turn the games into a tournament it’s astonishing, everybody gets really competitive about it.”

It is not an effect that was much in evidence when the FAI first dipped their toe in this end of the business back in 2011 with the Dublin Super Cup, which boasted an attractive line up – Celtic, Manchester City, Inter Milan and a League of Ireland selection – but, like most of these things, produced low-tempo football and lower gates.

Perhaps it was just the wrong place at the wrong time – Dublin in the depths of a recession – because two years later there were people hanging from the rafters for the “Dublin Decider” between Celtic and Liverpool, who subsequently returned to play Shamrock Rovers in front of another packed house.

Whatever about Dublin in 2011, tickets sales were never going to be an issue if you staged a Manchester derby in China, as Relevant will this July, but the global nature of it all, with Real Madrid, Bayern Munich and Juventus amongst others involved, certainly helps with TV and marketing, so the revenues allow for a level of prize money that matters, even if the silverware doesn’t much.

Whether it will all still seem like so many superstars going through the motions in a preseason friendly remains to be seen, but the club will be contractually obliged to bring just about everyone and Davids insists the players will take it seriously.

“You don’t think you come on to the pitch against a top-level opponent and you want to get smashed? I don’t think so,” says the man who claims his own preseason performances were what caught Van Gaal’s eye and earned him his debut. Still, the question of whether the manager is still with Manchester United may be more interesting than anything that transpires on the pitch in Beijing.

Davy Russell on neck injury: ‘it was a very close one and I dodged a bullet’ 17:00
Aidan Coleman steps in for the ride on returning Epatante 17:00
Spurs chairman Levy warns of ‘irrecoverable loss of income’ if fans don’t return 14:03
Manly Sea Eagles NRL player Keith Titmuss dies after training aged 20 11:30
Arsenal and Leeds condemn online abuse of Pépé and Alioski 11:04

1 The Offload: Ireland are stuck in no man’s land
2 Nicky English: Galway and Waterford face battles with fatigue in All-Ireland semis
3 Every kind of wind imaginable was against Tipperary football - and they came through
4 Ken Early: Roles have reversed for Guardiola and Mourinho
5 The revisionists might say otherwise, but the GAA? A class apart
Real news has value SUBSCRIBE
Crossword Get access to over 6,000 interactive crosswords