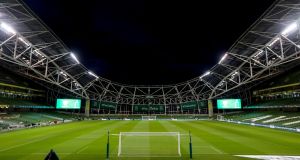 Republic of Ireland and Liverpool legends will play a friendly match at the Aviva Stadium on April 12th. Photograph: Ryan Byrne/Inpho

Former Republic of Ireland and Liverpool players will face off at the Aviva Stadium on April 12th in aid of the Sean Cox Rehabilitation Trust.

The Meath native was the victim of an unprovoked attack outside Anfield last year ahead of Liverpool’s Champions League tie against AS Roma. The match organisers aim to raise vital money for his rehabilitation

Republic of Ireland manager Mick McCarthy will take charge of some familiar names in green, while Kenny Dalglish will manage the Liverpool legends.

Jason McAteer, Phil Babb, John Aldridge, and Ireland’s record goalscorer Robbie Keane will play for both teams in the match, having all worn green and red in the past.

Champions League winners Jerzy Dudek, Vladimir Smicer and Djibril Cisse will be joined by the likes of Ian Rush and Robbie Fowler for Liverpool on the night.

Speaking at Monday’s launch, McAteer said he was looking forward to playing in the Aviva Stadium for the first time, especially for such a fantastic cause.

“I’ve watched Ireland play in the stadium numerous times, and was disappointed never get the chance to play here. When the opportunity came about to play in this game, I couldn’t turn it down.

“We will be playing to raise as much money as we can for the Sean Cox Rehabilitation Trust. I’m honoured to have been asked to play in this game.”

Sean’s wife Martina Cox, Sean’s son Jack and Stephen Felle, a trustee of the Sean Cox Rehabilitation Trust, were all present at Monday’s launch at the Aviva.

Next month’s match will kick off at 7.45pm and ticket prices will start at €20 for adults, Under-16s will be €10 and a family ticket (two adults and two children) will be priced at €70. Tickets for the game go on general sale via Ticketmaster on February 14th at 10am with pre-sales for FAI season ticket holders going on sale on February 12th at 10am.