Second half switch shows Liverpool may find a way to Kiev 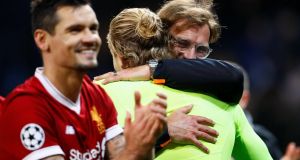 The Liverpool dressing room was a predictably emotional place around 8.30pm on Wednesday after a first half in which their passiveness and Manchester City’s excellence had threatened their hold on the Champions League quarter-final. While elsewhere in the Etihad Stadium Pep Guardiola was combusting and getting himself sent to a padded seat, however, Jürgen Klopp was silent. He had a 5-1 aggregate victory over the finest team in the land to plot.

Klopp the gurning, manic cheerleader is an image the Liverpool manager regrettably accepts he cannot shake but, as Virgil van Dijk said before the second leg: “He is much more than that.” Another demonstration that teams do not reach the last four of European football’s elite competition on pure emotion was served at half-time at the Etihad. Klopp initially let his players do the talking, or the shouting in Dejan Lovren’s case. “I told the lads to wake up because it was not good enough and I said we were sitting too deep,” the Croatia international said after one of the most commanding nights of his Liverpool career.

His manager listened, waited for order to descend on the dressing room and began his tactical instructions for the second half with some pointed advice for Lovren. “Yes we are sitting too deep,” Klopp said, “because you are not pushing up”. The central defender elaborated: “He wanted me and Virg to be more compact and push the team up but it was quite difficult to push up when City had the ball. It was all positive, nothing negative, but I needed to remind the guys that we had 50 minutes to be in the semi-finals of the Champions League and we needed to give more. The first 10-15 minutes wasn’t good enough.

“When you see the second half, again they had a couple of chances but nothing too serious. We did much better in the second half – we were higher, we were much more compact and we were better organised defensively.”

City, without their conductor on the sidelines for guidance, still managed seven attempts on goal in the second half – 13 in the first – but found no way to add to Gabriel Jesus’s second-minute opener. Liverpool had three after half-time and converted two.

Klopp’s team were evidently more clinical in both games but also more disciplined, organised and mature. Of course they had luck too, especially between the 41st and 42nd minutes of the second leg when Bernardo Silva struck a post and Leroy Sané’s tap-in was wrongly disallowed for offside, changing the complexion of the tie and that of the City manager.

In a contest billed as the calm, brilliant precision of the Premier League champions-elect versus the ferocity of Klopp’s attacking game it was Liverpool who displayed the former, and more besides. Had they beaten the runaway leaders of the Spanish or German league 5-1 on aggregate there might be wider recognition of what Liverpool’s former European Cup winning captain Phil Thompson called “one of the great European results in our history”. As Lovren put it: “When you concede one goal and score five against Manchester City, I think we should respect Liverpool more.”

Liverpool are unbeaten and the highest scoring team in this season’s Champions League. The versatility they displayed over two legs against Guardiola’s side also bodes extremely well for what lies ahead on the road to Kiev. Roberto Firmino and Sadio Mané dropped deep and wide to create a five-man midfield as the visitors regained their composure and executed Klopp’s second-half gameplan to perfection on Tuesday.

His defence, as per the instruction to Lovren and Van Dijk, was far more compact. Encouragingly for Klopp, the shape of his team changed around the half-hour mark as players took responsibility for combating City’s breathless approach.

“It was a difficult situation for us in the second minute but I was calm,” Lovren said. “If I’m not calm then we have a big problem. We talked on the pitch, a few of us, and said we need to keep our heads and stick together because this is a crucial moment and if we are not calm we will concede another one. To concede such a quick goal was not what we wanted but maybe it acted as a wake-up call for us. We had luck, we had luck in a couple of moments to be honest, but when you look over the two games we have been brave and when you are brave the luck goes with you.”

Lovren looked ahead to next season in the aftermath of Liverpool’s third consecutive victory over City – Klopp’s eighth win in 14 matches against Guardiola – and insisted the Premier League title race will be much closer. “It was weird this season because we didn’t catch up well from the beginning,” he said. “I’m definitely confident that next season we can push everyone, even ourselves to do better, from the beginning to the end.”

Next season can wait. Europe is again full of possibilities for Liverpool, improving Liverpool, in the present. The Croatian added: “The competition is wide open and anything is possible now. From a personal point of view I don’t want Real Madrid in the semi-finals. They have a lot of experience in the Champions League, a lot of records and over the past three seasons it is always them, but whoever we get will find it difficult to come to Anfield and score.”