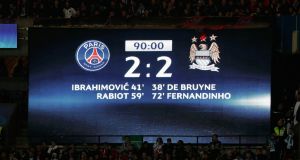 A view of the scoreboard in the 90th minute. Photo: Reuters

The sight of David Luiz pulling down Sergio Agüero virtually from kick-off cheered the visiting fans. It meant the unpredictable Brazilian was booked and as he was already carrying a yellow card was ruled out of next week’s return leg.

City were off to a flyer. While Kevin De Bruyne failed to clear the first man with the subsequent free-kick, when the ball broke back to the Belgian moments later he let go a 20-yard shot that, though high, was a warning to PSG.

So too, was the corner forced by Jesús Navas as the French champions of the last four years were pinned back. Now though, PSG asserted themselves.

Before the game Eliaquim Mangala stated his respect for Zlatan Ibrahimovic, Edinson Cavani and Ángel Di María but claimed none of the trio frightened him. The defender might also have mentioned Blaise Matuidi as it was the midfielder who gave Mangala and City a first scare by bursting into the area before being felled by the Frenchman. The referee, Milorad Mazic, decided it was not a penalty which looked the wrong call. Yet the official had no hesitation in awarding a spot-kick when David Luiz was later sent tumbling via a Sagna leg.

The blame could be traced back to Joe Hart. The goalkeeper had punched when he might have caught a Cavani flick-on and that returned the ball to Di María who had delivered the initial free-kick following a Gaël Clichy foul.

This allowed the ball to be pinged back in and then the penalty was won. Hart could only redeem himself by saving from Ibrahimovic and he did, diving low to his right to beat the ball out, and here was one blow made against the iconic No10.

He suffered a second almost instantly. As would be the story of the half, City’s defence was parted too easily when a ball was threaded down the middle and in roved the Swede on Hart. As Ibrahimovic took his time Hart refused to race all the way out, sticking to the edge of the area. The ploy worked. Ibrahimovic tried to curl the ball beyond Hart, to his left, and lifted it way too high, much to his disgust, and the stunned disbelief of PSG fans.

After the bright start City were experiencing why they are underdogs in the tie. The fragile central defensive partnership of Mangala and Nicolás Otamendi was being given scant protection by Fernandinho and Fernando, and so PSG could walk through City at will.

Then came three topsy-turvy minutes which closed with the score standing at 1-1. First of all, Fernando won possession in the centre circle and passed to Fernandinho and he strode forward before playing the ball right to De Bruyne.

City’s most potent attacker benefited from some slapstick David Luiz defending as he muddled his feet up and missed the chance to intercept. De Bruyne took the ball and thumped it past Kevin Trapp.

Here was jubilation for City and a key away goal for them. But this emotion changed to dismay when, on 41 minutes, Fernando dawdled over a pass out from Hart. Ibrahimovic closed down and he tried to clear his lines but only ricocheted the ball off the centre-forward and in for PSG’s equaliser. When Mazic blew for the break a noisy Parc des Princes crowd had witnessed an entertaining first half and, despite the manner of Ibrahimovic’s strike, City could take heart from the scoreline.

The equation now was that if PSG could be held then a draw, here would be a fine result, though given the holes so far drilled through City’s rearguard it appeared a difficult ask.

Hart had been one of two changes from Saturday’s 4-0 hammering of Bournemouth as Pellegrini decided it was Sagna’s turn at right-back with Pablo Zabaleta relegated to the bench.

Given the Frenchman had conceded the penalty it did not appear the wisest decision. But, there was better from Sagna when he lifted his 5ft 9in to beat Ibrahimovic’s 6ft 6in to a header during the early part of the second half.

PSG’s second duly arrived just before the hour. Again, defending was City’s downfall. Otamendi missed a Maxwell cross from the left and Mangala’s header might have beaten Hart but went from a corner. When it was swung in Cavani headed on, Hart punched out, and Adrien Rabiot, a former City academy player, finished.

But profligacy proved PSG’s curse. When Ibrahimovic had his next chance to score he headed against Hart’s bar.

Then came what might prove the contest’s significant moment. Sagna’s cross finding its way off Aurier and Silva for Fernandinho to finish. Guardian Service