Pep Guardiola retracts claim that Sadio Mané is a diver 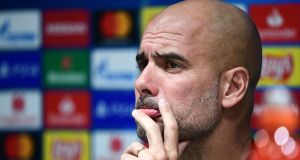 Manchester City manager Pep Guardiola: ‘Far away from my intention to say Sadio [Mané] is this type of player because I admire him a lot.’ Photograph: Miguel Medina/AFP

Pep Guardiola has retracted his claim that Liverpool’s Sadio Mané is a diver, with the Manchester City manager also saying he did not wish to “pour oil on the fire” before the champions’ visit to Anfield on Sunday.

Guardiola suggested Mané is “sometimes diving” after the player was booked for simulation in Liverpool’s last-ditch victory at Aston Villa on Saturday.

This followed the forward having secured a penalty in the fourth minute of added time against Leicester and late on against Tottenham. The score was 1-1 in each match and Liverpool went on to win on both occasions. Jürgen Klopp had forcibly disagreed with Guardiola’s view and he has been forced into a climbdown.

“In the 94th minute it was against Leicester, it was a penalty and it was wow,” Guardiola said. “That was the intention for my comment. Far away from my intention to say Sadio is this type of player because I admire him a lot.

“Jürgen said he knows Sadio better than me. And I have an incredible respect and the message in the football always try to be like this, always positive and attractive. My son and my daughter, when they win in the last minutes, they ask me how lucky they are. I say it’s not lucky.

“What Liverpool have done last season and this season many times is because they have this incredible quality and this incredible talent to fight until the end. Hopefully I can clarify everything for Jürgen.

“That’s why I said to my players, not just my son and my daughter, that it is not lucky. It happens once or twice in a life then yes [it is], but this happens maybe 10 or 12 or 13 times.”

Klopp also suggested Guardiola is fixated with Liverpool. “I didn’t listen to what he said, so I don’t know,” he said.

Guardiola attempted to close down Klopp’s claim regarding City and tactical fouls, a view also held by Ole Gunnar Solskjær, his predecessor as the Manchester United manager, José Mourinho, and the West Ham manager, Manuel Pellegrini. “No comment on that. I don’t put oil in the fire,” he said.

If City beat Atalanta at the San Siro in Milan on Wednesday night they are guaranteed passage to the Champions League knockout stages. Atalanta’s home ground did not meet Uefa’s requirements.

“I’m wanting to qualify as soon as possible,” Guardiola said. “I’m not thinking of rotating my squad. I go game by game, try to win tomorrow, then we are already there for one more year.

“But if not we have Shakhtar Donetsk and Dinamo Zagreb still to play and we will see then. Wednesday is the most important to try to win and after go on to the next one.”

John Stones is in line to make a first start in the competition, his season having been hampered by injury. “It’s been difficult getting injured,” the centre back said.

“It was difficult not being able to be there for the team and manager, trying to stay as fit and healthy as I can, trying to get a run of games when called on.

“Now I feel good, feel fit and that’s the main thing. I need to stay like this for the rest of the season.” – Guardian

5 Trump endorsement by Jack Nicklaus leads to avalanche of dismay