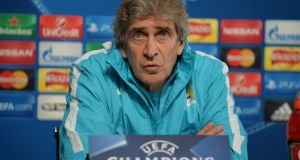 Manuel Pellegrini has denied Manchester City struggle without Vincent Kompany despite the side having markedly poorer results when the captain has been absent this season.

City are again without the Belgian for tonight’s match, the final Group D game, at home to Borussia Mönchengladbach. Kompany is unavailable because of a calf problem, and on Saturday City lost 2-0 at Stoke City in a display that featured some of the side’s poorest defending of the campaign.

Kompany missed the game and has played in only eight of City’s 15 Premier League matches this season.

His value is illustrated by them being unbeaten in those games, winning six and conceding only once.

The centre back’s appearances have coincided with seven clean sheets, while 20 of a possible 24 points have been claimed.

In the seven league outings without the Belgian, City have conceded 15 goals, won three times, lost four and taken only nine points from the 21 on offer. In the Champions League Kompany also led the team in their finest display, the 3-1 victory at Sevilla on November 3rd.

“We won the six and had four clean sheets. It depends on the performance of individual players, it depends on a lot of things. In the last two years we played a lot of games without important players.”

Sergio Agüero also remains injured because of a kick on a heel he suffered in the victory over Southampton last month. City need to beat Monchengladbach and hope Sevilla win against Juventus – who have defeated City home and away – to win the group and have a better chance of a favourable last-16 draw.

Pellegrini denied his side were too reliant on Agüero and Yaya Touré – another of the club’s recognised stellar talents – as well as on Kompany, but he admitted City are inconsistent.

Touré is fit to face Monchengladbach following a slight muscle problem, and the manager said of the importance of the Ivorian, Agüero and Kompany: “I don’t agree with your conclusions. The whole season there are a lot of games we played without our important players. We must make a balance of the whole season.”

When pushed on whether the striker Wilfried Bony and central defenders Nicolas Otamendi and Eliaquim Mangala had stepped up as replacements for Agüero and Kompany respectively, Pellegrini said: “I analyse individual performance with the players not with the press.”

Pellegrini suggested Agüero may miss Saturday’s visit of Swansea City. “It is an injury that he cannot work [train],” the manager said. “He needs time to recover from that problem. It is not a serious injury; it is a pain injury.”

Pellegrini hinted Kompany remains some way off a return. “Vincent is improving,” he said. “He is doing some tests with his calf. We will see in the next days how he improves.”

The manner of the loss at Stoke concerns Pellegrini and he compared the result to the 4-1 league defeats by Spurs and Liverpool. “We didn’t do well against Tottenham or Liverpool but we have had a lot of clean sheets also,” he said. “We are not a consistent team in some games.”

Yet despite drawing Barcelona in the last 16 when finishing second in the group in the past two seasons, Pellegrini struck an optimistic note should City do so again.

“The most important thing was to qualify,” he said. “The game on Tuesday is not the same thing, that if you need to win to qualify. Chelsea, Manchester United and Arsenal would like to be in our position.

“If you don’t finish at the top of the group, I don’t think it is disappointing. If we win and Juventus beat Sevilla, I think Juventus is the best team in the group. I don’t think we have to be always pessimistic about the draw.”