Defending champions face Atlético Madrid in first round of last 16 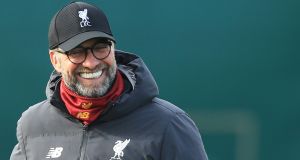 Liverpool manager Jürgen Klopp said: ‘We don’t feel like the winners of last year’s tournament, we feel like contenders for this year’s.’ Photograph: AFP via Getty Images

Jürgen Klopp has said Liverpool return to the scene of their sixth European triumph not with the confidence of Champions League holders but to prove they are contenders to defend their crown in Istanbul.

The reigning European champions face Atlético Madrid at Estadio Metropolitano on Tuesday 262 days after defeating Tottenham to win their latest Champions League title. Klopp has claimed Juventus and Paris Saint Germain are bigger favourites for this season’s competition than his runaway Premier League leaders, who will become the first English team in history to reach three consecutive European Cup/Champions League finals should they reach this season’s showpiece at the home of their 2005 triumph. But he admits there is no better place or opponent for Liverpool to reaffirm their European credentials than away at Diego Simeone’s Atlético.

“We don’t feel like the winners of last year’s tournament, we feel like contenders for this year’s, and we want to show that,” the Liverpool manager said. “We want to be there in Istanbul if possible, and for that we know we have to work our socks off, historically and for us in general. That is exactly what we will do tomorrow and in the return leg.”

Liverpool have never lost a knockout tie in Europe under Klopp – 10 fixtures in total – or a knockout tie in the Champions League since losing to Chelsea in the 2008-09 quarter-finals. “It’s impressive to be honest, that record,” admitted Klopp, who believes the fragile nature of the knockout stages adds an extra competitive edge to Liverpool’s game.

“It looks like it,” he added; “And some of the best games we played were away. Bayern was one of the best games I have ever witnessed, and so was Barcelona, even though we lost 3-0. If we can get a result, we know Anfield is a proper threat and a help. That’s the story so far. It doesn’t mean it will be the same this time. If there is a team where you have to be at your absolute best at all times, it’s Atlético because they give no presents. Absolutely no presents. If you work as hard as possible, then you have a chance. If you don’t do that, then you don’t even have a chance.

“That’s why Atlético were that often in European finals as well. It shows how long they were together, and now they had to change, they did that, brought in big potential, some experience. I see a team playing and for me it looks like a proper machine. The moment you are not 100 per cent concentrated, they close you down with two or three players and then counter-attack. If you are not focused and concentrated in your own offensive play, you will not even have a shot on target because they close the centre so good.

“They defend in a specific way but on the other hand I don’t think they played against a team like us and we should not forget that. We combine a few things; we are not badly organised; we play football; we have respect for different aspects of the game; our readiness to fight is exceptional.”

Klopp discounted Atlético’s struggles this season as the inevitable consequence of a transition season having lost several of the big-name talents that helped them to the 2014 and 2016 finals. And he retains firm admiration for Simeone, whose demonstrative touchline behaviour overshadows even that of the Liverpool manager.

“People say I am emotional on the sideline,” said Klopp. “If I am level four I would say he is level 12. I am really like the kindergarten cop against him. He has been here eight years. That is really long, and still having this emotional level, wow. That is really impressive. His teams are always world-class organised. That makes him one of the best. We have exchanged messages after big games. We meet in a competitive game for the first time. It will be interesting, really interesting.”

Trent Alexander-Arnold, who Cafu claimed at the weekend could win the Ballon d’Or, admits Liverpool know that one mistake against Atlético could signal the end of their dreams of a hat-trick of Champions League finals.

The Liverpool right-back said: “We believe we can do it. There have been tough games before but we have overcome different types of hurdles, different types of games. The experience we have had over the last two years means we know how to deal with certain situations. But just because we have been to two finals, it doesn’t mean we are going to get there this year. This is knockout football and things can happen. But in things that we have learned we understand what it takes. If we were not at 100 per cent, we will get punished. We have to be at 100 per cent – otherwise we will be out.”