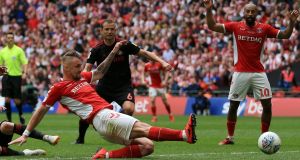 Lee Bowyer was the last man standing in the Charlton technical area as his backroom staff and substitutes bench emptied on to the pitch, fleeing down the touchline to join the pile-on after Patrick Bauer snatched victory to seal promotion deep into four minutes of second-half stoppage time.

They had recovered from an early dreadful mistake by Dillon Phillips, their goalkeeper, to return to the Championship.

For Sunderland, whose players crashed to the ground at the final whistle, this proved another heartbreaking and haunting trip to the national stadium, having not won on any of their past seven visits here.

Jack Ross, the Sunderland manager, made it clear that the outcome of this game would define their season. The chilling words “the league just turned into a cup” greeted thousands of supporters above the underpass on Wembley Way, a message that both sets of players felt to full effect at full time.

Charlton could not have endured a more calamitous start.

In years to come, when broadcasters raid the archives for montage footage, the moment when, with four minutes on the clock, Naby Sarr’s blind backpass trickled under the dangled right boot of Phillips will undoubtedly again come under the microscope.

Instead of controlling the ball, he terribly misjudged it and, by the time he went running after it, the net had bulged. It was the first own goal a shell-shocked Wembley had seen since 1946. A silently seething Bowyer covered his face, Sarr, who was replaced at the interval, scrunched his face as Phillips slapped his thighs.

It was a gift Sunderland supporters’ seized with open arms, gleefully jeering Phillips’ every touch as they basked in his error. Sunderland managed to drain Charlton of belief without even kicking a ball.

But, in fairness to Phillips, he puffed out his chest and recovered, making a smart stop to shut out Grant Leadbitter’s rasping effort. Charlton slowly stirred and fashioned a slick equaliser.

It was Ben Purrington’s first league goal but at the heart of the move was an exquisite flick by Anfernee Dijksteel, after clever play by the lively Joe Aribo.

Dijksteel fed Lyle Taylor, who slid the ball across goal for Purrington, arriving late at the back post, to do the rest.

As Charlton wheeled away towards a corner flag to celebrate, Bowyer ran into the Sunderland technical area punching the air. As for Krystian Bielik, his first thought was to head in the opposite direction and embrace a thoroughly relieved Phillips.

Charlton, buoyed on by almost 40,000 supporters, had lift-off. Bowyer’s side shaded the rest of the first half and continued to hold the upper hand through a cagey second period, though the Sunderland substitutes Lewis Morgan and Will Grigg passed up half-chances.

Jack Ross also introduced Aiden McGeady to a rapturous ovation, but it was the former Sunderland midfielder, Jonny Williams, who made an immediate impression off the bench.

Williams’s first act was a classy, twirling high ball that just eluded Taylor and, seconds later, he wriggled free down the left before luring Luke O’Nien into a foul. No sooner had the fourth official indicated four minutes of stoppage time, Williams was at it again but Josh Parker could not divert the ball goalwards. But then came the final twist in a humdinger of a play-off final. – Guardian

3 Joanne O’Riordan: Inspirational Press a winner in more ways than one