All not well in Bavaria as Bayern Munich stare down Liverpool 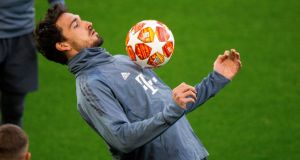 Bayern Munich’s Mats Hummels during training at Anfield ahead of the Champions League Round of 16 clash with Liverpool. Photo: Peter Powell/EPA

“Maybe they are slowly becoming part of the problem,” mused Stefan Effenberg in November. The former Bayern Munich midfielder was referring to Karl-Heinz Rummenigge and Uli Hoeness, the chief executive and the president respectively, and went on to suggest the club were going stale under their leadership.

“They have made grave errors when it comes to the planning of the squad,” he said. “They have to look at the characters and get rid of five or six players. Maybe it is time for some new impulses from the outside.”

Effenberg has a lot to say, as most pundits do, but he may have a point. There is something strange about Bayern, who face Liverpool in the first leg of the Champions League last-16 tie at Anfield tonight, at the moment. They are keeping the pressure on Borussia Dortmund at the top of the Bundesliga, having twice come from behind against Augsburg on Friday to win 3-2, but the mere fact they are not first in the table is instructive.

Bayern have won the past six league titles but have looked sluggish and unconvincing for most of the season. It appears, as Effenberg suggested, that the squad have lost their shape, that they have got too old. Arjen Robben has been there for 10 years, Franck Ribéry for 12. Manuel Neuer, Jérôme Boateng (ruled out tonight by illness) and Mats Hummels are more than 30 years old. Thomas Müller is a shadow of the player he once was. Robert Lewandowski, also 30, is still scoring goals, just not as frequently.

There are extremely talented players at the club and Leon Goretzka, Kingsley Coman and Joshua Kimmich are under 25 and will continue to improve. Perhaps the problem is that there are not enough of the players who are at the peak of their powers. Those you expect to be there, such as Thiago Alcântara, David Alaba and James Rodríguez, are unlikely to reach the level needed to form the backbone of a Champions League-winning side. It is telling that Bayern’s transfer record is still the £36.5m they paid for Corentin Tolisso in 2017.

They have won five of their six games since the Christmas break, though defence is a problem. They won two of them 3-2 but the manager, Niko Kovac, said after the game at Augsburg, in which Bayern conceded after 12 seconds, “that maybe some players were already thinking about Liverpool”.

Bayern will be boosted by the fact Virgil van Dijk is suspended for the first leg but for Neuer it will count for nothing unless his team sort out their own defence: “Liverpool will create more chances. Our positioning has to be better, we have to have more people in our area,” he said.

It will be fascinating to see how Bayern fare. There is already friction between the fans and the board, with supporters unfolding a banner of Hoeness and Rummenigge with their faces covered with euro signs for last month’s game against Stuttgart. The were unhappy Bayern had gone to Qatar for their mid-season break.

The most surreal moment of a hitherto disappointing season came in October, when Bayern called an impromptu press conference. There were suspicions Kovac would be sacked but instead Rummenigge, Hoeness and the sporting director, Hasan Salihamidzic, started laying into the press.

Journalists listened as the trio lambasted the “disrespectful” reporting. “It’s about time the biggest club in Germany takes a clear stance on this issue,” Hoeness said. The response to the 33-minute tirade was justifiably scornful. Bayerischer Rundfunk said the “bosses at the Bavarian club have crossed a clear line with their attack on the media. The attack on free speech and reporting was wrong and completely unnecessary.”

Paul Breitner, a World Cup winner in 1974, said he had never seen Bayern show “such weakness” in his 48-year-association with the club. Of Hoeness, he added: “With Uli it is always about the Bayern family. And now the children have to say that they are ashamed of the dad.” The comments did not go down too well and, according to Bild, Breitner was banned from the VIP section of the Allianz Arena.

Out of time and out of sync? If Bayern win against Liverpool and go far in the Champions League the criticism will die down. If they do not it may be the start of a long farewell, not only for some players but for some at the top. – Guardian service