Balakov: England has a bigger racism problem than Bulgaria 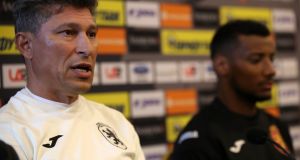 Bulgaria manager Krasimir Balakov and Georgi Pashov during a press conference at the Vasil Levski National Stadium, Sofia ahead of the Euro 2020 qualifier against England. Photo: Nick Potts/PA Wire

Bulgaria manager Krasimir Balakov believes English football has a bigger problem with racism than they do.

The build-up to Monday’s Euro 2020 qualifier in Sofia has been dominated by concerns over possible racist abuse at Natsionalen Stadion Vasil Levski.

England players were victims of racism on their last visit to Bulgaria in 2011 and Gareth Southgate briefed the squad about the Uefa protocol on dealing with such issues at the start of the international break.

The players have also been speaking about the issue, which enraged Bulgarian Football Union president Borislav Mikhaylov to the point that he said English players should face sanctions from Uefa if they continue to talk about the possibility of racist abuse in Sofia.

Mikhaylov spoke of “unjust” comments being made by England and manager Balakov, whose initial answer on the matter was that he did not want to talk about the topic, shone a light on the visitors’ own issues with racism.

“What I can say is that I don’t think we have a problem,” he said.

“In the Bulgarian championship, we have a lot of players of different ethnicities and skin colour. I don’t think that we have this big problem like, for example, England do.

“I would like to focus on football because at the end of the day we’re all civilized Europeans and we’re all working for this sport and that’s all the matters.”

Asked to clarify his remark on England, Balakov said: “What I meant was that in the Bulgarian championship we’ve not had such problems.

“While there have been incidents in various levels of English football involving racism, which I consider something normal because it’s a big country with a very diverse population.

“But we don’t have this problem in Bulgaria, I can assure you of that.”

Southgate has repeatedly said that England need to get their own house in order and recently referenced the racist abuse at the National League clash between Hartlepool and Dover.

Pushed on whether England players have anything to be worried about, Balakov said: “Once again, it’s not an issue that has happened recently in the national team games, meaning racist chants or whatever.

“I would once again advise people to think and talk about football because this is the reason why we’re actually here. And we should not discuss something that has not even happened yet.”