Celtic left with a mountain to climb after Valencia defeat 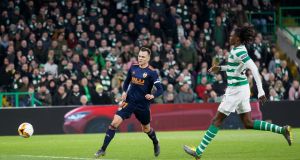 Valencia’s passage to the last 16 of the Europa League already seems secure. On a bruising night for Brendan Rodgers and Celtic, the Spanish side cantered towards a victory that should render next week at the Mestalla a formality. Rodgers looked on helplessly.

That Valencia have superior resource to Celtic is hardly breaking news. Nonetheless, a team normally so ebullient at home were curiously flat. Long before full time, it had become a question of how many Valencia were of a mind to score. They settled for two, which barring an unforeseen collapse will prove sufficient.

Progression to the knockout phase from a section that included Salzburg and RB Leipzig represented an excellent achievement by Celtic. There is a legitimate train of thought that suggests this competition, away from the harsh realities of the Champions League, represents the more logical scene for Rodgers’ team. The gulf in quality between domestic opponents in Scotland and those in Europe’s premier competition has proven problematic for Celtic to handle in the recent past.

The Scottish champions entered this fixture in fine fettle. A wounding defeat at Ibrox to close 2018 has been followed by seven victories; no team had scored against Celtic this year. Key to that run was Oliver Burke, the forward seeking to revive his career in Glasgow while on a loan deal from West Brom. Burke was deployed as the focal point of the Celtic attack here, in preference to the club’s record signing, Odsonne Édouard. Remarkably for a player who has moved for combined transfer fees of almost £30m at the age of 21, this marked Burke’s debut in European competition.

Valencia’s propensity to draw games has been the key aspect of their La Liga season. Their cagey opening here suggested the same outcome would suit them before Scott Bain produced acrobatics to bat away a Daniel Wass header that seemed destined for the top corner. Celtic had been the better team until then without troubling Neto, save for long-range efforts from Ryan Christie and Callum McGregor.

Valencia had deployed the modern day rarity of two strikers, with the aim of capitalising on loose Celtic possession in defence an obvious one. In Daniel Parejo, the visitors had the stand out player of the opening half. Burke was a peripheral figure for 36 minutes, at which point he narrowly failed to connect with a through ball from Scott Sinclair. Neto was duly able to boot clear.

Celtic screamed in vain for offside as Valencia claimed the opening goal they just about deserved. Parejo lofted a wonderful pass to Rubén Sobrino, who unselfishly cut the ball back for Denis Cheryshev to tap in.

Parejo, who had been an injury doubt before kick-off, was removed at half-time. The former Arsenal man Francis Coquelin was his replacement. The captain’s exit, however, did not blunt the Valencia threat.

Scott Brown, who endured his latest torrid night against serious opposition, conceded possession and the ball was swiftly shifted towards Cheryshev on the left flank. A terrific cross followed, with Sobrino on hand to volley the ball past the stranded Bain. For the La Liga side, this was proving so blissfully simple against a Celtic team complicit in their own downfall.

Rodgers turned towards his bench for inspiration. Édouard and Timothy Weah appeared in place of Sinclair and Christie. Édouard’s first act was to tumble to the turf in pursuit of a penalty, which rather summed up Celtic’s level of desperation with half an hour of the game remaining. It hardly boosted the mood of the natives to see Gonçalo Guedes, a winger Valencia reportedly signed for €40m from Paris Saint-Germain, introduced to proceedings.

On Sunday, Celtic will return to league action and a tricky trip to Kilmarnock. The smart money would be on them pulling away to secure an eighth title in succession. There remains the live prospect of a third clean sweep of Scottish trophies in as many years. When the stakes are raised, as evident again here and generally through little fault of their own, Celtic cannot keep pace.