The Brazilian’s had their home World Cup ruined by Germans, now for their Olympics 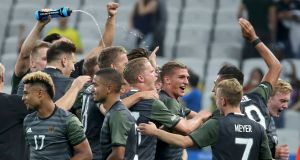 Germany will face Brazil for the Olympic football gold medal after the World Champions defeated Nigeria 2-0.

Lukas Kolstermann scored the opening goal in the ninth minute and Nils Petersen added the second just before the final whistle.

The match offers the chance for Brazil to claim some revenge for the 7-1 humiliation they suffered at the hands of Germany in the World Cup semi-finals two years ago. These Olympics, like that World Cup, are hosted by the Brazilians and they’ll be expecting a far better outcome this time around with Neymar among their ranks. Against a young German selection, minus any of their own household names.

Earlier in the day Brazil beat Honduras by six goals in their semi-final - with Neymar and new Manchester City signing Gabriel Jesus both scoring two goals.