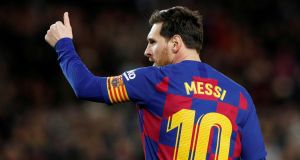 Barcelona’s players, including Lionel Messi, could take a 70 per cent pay cut during the coronavirus outbreak. Photograph: Albert Gea/Reuters

Barcelona are considering a pay cut of up to 70 per cent for all of their players for as long as the coronavirus lockdown lasts in Spain. The players are understood to be receptive to the reduction but no agreement has been reached.

The intention is for any measures to apply equally to the men’s and women’s football teams, the B team, the under-19s and to those who play basketball, handball, futsal and roller hockey. It would also apply to staff working with those teams.

Barcelona are the only La Liga club to admit they are looking at ways to alleviate the economic impact of the Covid-19 pandemic, although the league announced it would support its members in any measures they deem necessary. More clubs are expected to follow suit.

Labour legislation in Spain allows companies to apply temporary measures to lay off staff or reduce wages in exceptional circumstances but Barcelona would prefer to reach a negotiated settlement. Staff in non-football departments are resigned to the probability they will be affected.

The TV company that owns the rights to La Liga in Spain has announced it will apply temporary measures to more than 1,000 staff.

Barcelona held remote meetings late last week and again on Tuesday. They had a positive response from the club captains. The proposal was for the reduction to last as long as the lockdown after which players would go back to earning 100 per cent of their salary, even if competition does not return and the league remains unfinished. Spain’s state of alarm was announced on March 11th and is set to continue until at least April 11th.

Most Spanish football players earn a monthly salary, referred to as the sueldo, plus two larger annual payments six months apart known as the ficha. It is not clear whether the reduction would apply only to the sueldo or to the ficha as well. Four monthly payments remain outstanding this season.

Barcelona’s economic situation is precarious and there are concerns the club may not be able to meet some of their payments if the season is not completed. Of an annual budget of €1.047 billion, 66 per cent was spent on wages last season, down from 70 per cent the season before but considered too high. The projection was 61 per cent this season but that target is now unlikely to be met.

Meanwhile the English Football League is working with the Professional Footballers’ Association to determine a solution to financial matters, notably player wages. An outcome is being sought that will ease clubs through the coming months, with football suspended until at least April 30th.

Leeds are among several Championship clubs to have held discussions with players about deferring wages. The Leeds director of football, Victor Orta, and the chief executive, Angus Kinnear, discussed it with players on Tuesday and, in the event such a measure is enforced, it is understood the wages of the manager, Marcelo Bielsa, and his backroom staff would also be deferred. Leeds have five remaining home fixtures, each of which earns around £700,000 in matchday revenue.

It is understood discussions with the PFA stemmed from a conference call between Championship clubs last week when they talked about potential strategies for lessening the strain of player wages on finances at a time when there is little to no income.

Some clubs operate with significantly higher wage bills than others and, for some, the short-term financial hole created by the absence of matchday revenue is bearable. Birmingham have requested their players who earn more than £6,000 a week take a temporary 50 per cent wage cut, and many other second-tier clubs are believed to exploring similar solutions. – Guardian

1 Liverpool reverse decision to use government furlough scheme
2 Karen Robinson Walton: I am looking at him. I say ‘Benjamin, what have we done?’
3 Ken Early on Mick McCarthy II; racing will endure even the harshest criticisms
4 My favourite sporting moment: Donegal and Kildare’s high summer street opera
5 Ken Early: Mick McCarthy II was no blockbuster, more of a flop
Real news has value SUBSCRIBE
Crossword Get access to over 6,000 interactive crosswords