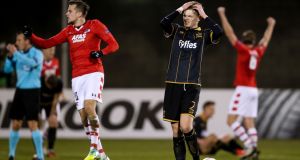 Dundalk’s Sean Gannon is dejected after the final whistle at Tallaght. Photograph: Inpho

For Stephen Kenny and his men this will be a black Friday alright.

As AZ head for home in the knowledge that they now control their own destiny, the Irish champions have been left to reflect on their most disappointing defeat to date in these Europa League group stages.

After that they must turn their attention to what will now be a tougher than expected task in Tel Aviv.

Asked on Wednesday about the pros and cons of Dundalk’s recent lay-off and his own side’s increasingly hectic schedule, Alkmaar coach John van den Brom had suggested he prefers it this way.

To judge by the way they started, the Irish side are better suited to being flat out too as they had been towards the end of the domestic season.

Here, they looked lethargic early on and having come into the game far better placed to settle for a draw, they surrendered the advantage of not really needing to score by conceding in the clumsiest way imaginable.

The goal rounded off a prolonged spell of uncertainty both on and off the ball that always threatened to prove costly.

AZ took just 10 minutes to make them pay. A run of corners initially yielded little but the locals never cleared their lines with any conviction. Then when Mats Seuntjens lofted the ball back into the area, Andy Boyle’s failure to connect with a header caught Dane Massey by surprise with the left back’s unintentional touch teeing up Wout Weghorst rather nicely for a close range finish.

Shocked by the early setback, Dundalk shook themselves up but their opponents now got to dictate the pattern of the game. Whereas Kenny had felt the visitors’ attacking style would present opportunities to catch them on the counter, now the tables were turned as the hosts sought to press forward while the Dutch withdrew and waited.

There were moments when Dundalk looked capable of playing their way back into the game with Ronan Finn threatening to dictate affairs in midfield and Daryl Horgan doing just about enough to remind us he was capable of more.

But there was little by way of goal threat during the team’s best spell with Ciaran Kilduff making little of two headers and nobody around to capitalise when Finn slipped the ball across the six yard box as the Alkmaar defence was for once caught napping.

Some of Dundalk’s momentum was lost when Stephen O’Donnell limped out of the game but the locals contested well until the break at which point they seemed to veer more seriously off course.

Alkmaar upped their game but Dundalk, with Benson now playing deeper and John Mountney out wide, couldn’t produce the sort of passing game they had been hoping for against a side who caught them more than once with their ability to move the ball very quickly from defence to attack.

Weghorst would have had at least one more goal during the second half had it not been for Gary Rogers who also did particularly well to get off his line to block down a low shot by Ben Rienstra. There was a touch of good fortune about a Seuntjens shot from a tight angle being deflected onto the outside of the right hand post.

Under increasing pressure to conjure up the goal that would give more room for manoeuvre against Maccabi next month, Dundalk did their best to change the pattern of things.

But after Finn went close with a chipped effort than David McMillan looked, for a moment, as though, he might turn home, they struggled to force Sergio Rochet into a save worthy of the name.

Late on, they were reduced to a last few desperate efforts as they hopefully lumped the ball forward with AZ obliged to reply in kind. But the Dutch side held on comfortably enough really until the home side eventually ran out of time.

The visiting coach’s joy at the end was clear to see. A few weeks ago it looked as though his side was as good as out of the competition. But after drawing in Israel and winning here, a win over Zenit in two weeks’ time will now be enough for a place in the last 32. If they lose, though, and Dundalk manage a score draw or better against Maccabi, Kenny’s men will save themselves but they could beat the Israelis and still go out

Either way, it seems, certain, they will have to play better than they did on this occasion.