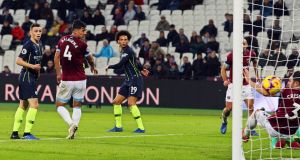 Manchester City found the London Stadium to their liking again as they thumped West Ham 4-0.

An ultimately routine victory made it eight wins from eight in all competitions and strengthened City’s hold on top spot in the Premier League.

While West Ham have taken time to get used to their new surroundings following their switch from Upton Park, Pep Guardiola’s side look utterly at home whenever they arrive at the former Olympic Stadium.

Neverthless, Hammers boss Manuel Pellegrini, facing his former club for the first time, opted for an attacking line-up having vowed to fight fire with fire.

It was a brave move, but ultimately doomed to failure especially with Arthur Masuaku and Felipe Anderson, two of the least defensively-minded players on show, manning the left flank. Suffice to say, Sterling could not believe his luck.

Having racked up 13 goals in their previous three trips to east London, number 14 arrived after only 10 minutes and actually came from a West Ham corner.

Nine minutes later it was two, Sane stepping around former City defender Pablo Zabaleta and rolling in another low centre which eluded everyone until Sterling tapped home.

But City survived that minor show of resistance and grabbed number three with Sterling, once again handed the freedom of Stratford by his non-existent markers, the creator.

This time the England forward found Sane, who showed wonderful composure to sidestep the sliding Fabian Balbuena before slotting past Lukasz Fabianski.

Sterling should have had a second shortly after the break but for a fine block by Fabianski, while at the other end Antonio was sent clean through by Javier Hernandez only to see his shot clip a post.

Arnautovic and Balbuena were also off target with headers as West Ham battled manfully for something to show from the game.

But City sensed there was more up for grabs and Sane was denied by a last-ditch tackle from Arnautovic, of all people, while Fabianski saved well from Sergio Agüero and Ilkay Gundogan.

Arnautovic had limped off, leaving West Ham a man short, by the time City landed one final punch in injury time, Sane striking from close range to round off another comprehensive east London win.