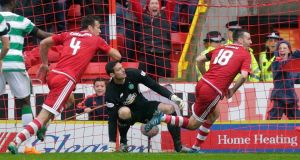 Striker Leigh Griffiths gave the Parkhead side the lead in the 35th minute with a penalty but that was cancelled by Adam Rooney’s spot-kick early in the second half, before Dons’ wide-man Jonny Hayes was shown a straight red by referee Craig Thomson for a tackle on Hoops right-back Mikael Lustig.

However, defender Quinn’s late strike from close range made it 2-1 and six successive league wins for the Dons at the start of a season for the first time, taking them two points clear of the champions at the top of the table with a game in hand against Hamilton on Tuesday.

Given that Celtic won all four meetings between the clubs last season, the Pittodrie side will see this as a significant marker in the title race while the Hoops will have to regroup for their Europa League group opener against Ajax in Amsterdam on Thursday night.

There was a moment of poignancy before an enthralling game unfolded, with a minute’s applause before kick-off in memory of former Dons and Scotland player Graham Leggat, who passed away recently.

Celtic almost got off to a dream start in the second minute when Andrew Considine was short with a pass back to Danny Ward allowing Parkhead midfielder Tom Rogic to pounce. But the Dons keeper blocked the shot for a corner, which a nervy looking home side defended.

In the 17th minute, after Quinn had fouled Stefan Johansen 25 yards from goal, Griffiths’ free-kick deflected off the wall and crashed off the bar before he volleyed the ball high over.

The game was slowly warming up.

Moments later, Considine headed a Hayes corner over the bar then failed to control a Kenny McLean cross after evading the Hoops defence, and things got worse for the defender when he pulled Griffiths back inside the box after the Hoops striker had latched on to a fine Charlie Mulgrew pass.

Considine was booked by referee Thomson before Griffiths fired the penalty past Ward for his ninth of the season.

The champions looked assured and when Hayes’ cross was missed by McLean two minutes from the break it looked like it would be another pointless afternoon for the Granite City men when faced by green and white.

At the start of the second half McLean appeared to aim a kick at Lustig while the full-back was on the ground with the ball underneath him, with Thomson stepping in to calm the situation while taking no action.

Moments later the official had the Dons fans in uproar when he refused to point to the spot when the ball appeared to strike Mulgrew’s hand in the penalty area from a Shay Logan cross.

In the 56th minute, however, Thomson did award a penalty when Celtic stopper Dedryck Boyata tumbled Dons midfielder Graeme Shinnie to the ground, with Rooney sending keeper Craig Gordon the wrong way.

The home side went all out for the winner but the game took another twist in the 72nd minute when Hayes was sent packing for his challenge on Lustig, who was immediately replaced by Efe Ambrose, with James Forrest on for Tom Rogic.

There was more drama to follow, however, when Quinn got on the end of a Niall McGinn free-kick to knock the ball past Gordon and keep the three points at Pittodrie, although ultimately they had to thank Considine for clearing a Griffith effort off the line in injury-time.