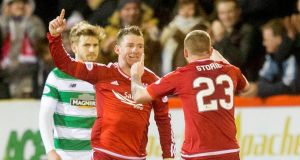 With the treble now gone, even the most certain of certainties are now being questioned at Celtic. Ronny Deila needed a domestic clean sweep to brush away the lingering indignity of a second successive failed European campaign but found his side exposed once more with Sunday’s League Cup semi-final loss to Ross County. Now, after this defeat, their domestic dominance might not be so much of a foregone conclusion either.

Celtic victories over Aberdeen were once taken as a given, with the Hoops winning 35 of their last 40 matches against the Dons dating back to 2005. That certainty has gone too, as the Pittodrie side completed their first home double over Celtic in nearly 25 years. Three points still separate the two sides at the top of the Premiership but the title race once more looks something like a race.

This should have been Celtic’s chance to respond, just days after their Hampden Park humiliation. Instead it was another stark demonstration of their failings, which increasingly make Deila’s position at the club harder to justify. Once seen as the thinking man of Scottish football’s simmering hotbed, the Norwegian is now the coach of a team that seemingly does very little thinking at all.

Scott Brown, who could do little as a still-injured second-half substitute on Sunday, was the embodiment of any abiding frustrations early on, nipping at the heels of every Aberdeen player close enough. He took his exasperation out on the ball too, striking over with a drive from the edge of the box 15 minutes in.

It did not take long for the angst to translate into assured control, though, as Celtic started to take a grip of the contest. Nir Bitton tested the Dons goalkeeper Scott Brown with a free-kick and Leigh Griffiths curled an effort wide soon after.

With Griffiths up front Celtic have an enduring outlet, willing to chase down everything, turning even the crudest hoof-and-hope into a potential assist. Stuart Armstrong, too, looked lively down the left, fizzing a cross along the goalline as the hosts weathered a storm greater than anything to come off the North Sea in recent weeks.

And yet it was Celtic who fell behind just after the half-hour mark. With Aberdeen’s first effort of the match Dubliner Jonny Hayes struck a fierce drive on the bounce, catching out Craig Gordon at his near post. Six minutes later, the Dons doubled their advantage as Simon Church bundled home Hayes’s inswinging corner.

Aberdeen’s season has been somewhat inconsistent. Their eight-game winning start to the campaign was followed by a five-match winless slump – and that sequence has set something of a tone for Derek McInnes’s side this term. There were inconsistencies in this performance too, allowing Celtic the majority of possession for some spells of the match before hassling and harrying them relentlessly in others.

Celtic, however, were even harder to gauge. A team so accustomed to high-pressure situations should not be so fragile but such weakness has become a crippling hallmark of Deila’s side this season. Griffiths appeared the only one not panicked by the scenario in which his side found themselves.

Colin Kazim-Richards was introduced at the interval in a move just as desperate as his deadline day switch from Feyenoord. His first touch as a Celtic player – an aimless, unchallenged, header straight out of play – did not bode well. Indeed, Celtic’s comeback never materialised, although Griffiths’s stoppage-time goal at least shortened the stick with which to beat Deila. Even still, how many more strikes can the Norwegian endure?

1 Ireland to stick with winning formula against England
2 Mourinho expects Son to miss rest of the season
3 Gerry Thornley: England primed to show their best against Ireland
4 Brian O’Driscoll accuses England boss Eddie Jones of ‘scaremongering’
5 Should fans be allowed drink in the stand at sporting events?
Real news has value SUBSCRIBE
Crossword Get access to over 6,000 interactive crosswords