‘Get your Shillelagh’s out and pull yourself a pint of the black stuff.....it’s our first ever LIVE broadcast’ 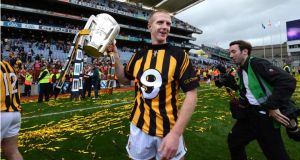 Dale, the Sky technician: “Live in one minute, gov.”

Geoff, the Sky presenter: “Paddy, what the fack do you call this place again?”

Pat Spillane: “It’s Pat. And we are in Clones. In Monaghan. The Farney County! Kavanagh country! The home of Nudie Hughes! 1985...they nearly had us....only for Mikey Sheehy that day, we’d have got bata agus bother...”

Geoff, the Sky Presenter: “Clo.Nes. Got that. It doesn’t half rain here, Pat. And it’s a bit bloody dark out there for four o’clock in July. Can we do anything about the lights? Place reminds me of facking Brentford in the FA Cup. In January.”

Dale, the Sky Technician. “Can’t do nuffin. No floodlights here. Should be okay as long as there’s no extra time. But the tea lady told me there is always extra time. Do a lovely cuppa here, Geoff. And currant cake.”

Geoff the Sky Presenter: “Barm who, Pat. That a Ty-rone lad?”

Geoff the Sky presenter: “Hello and welcome to our viewers in Ireland and Great Britain and well, what an historic occasion here on Sky sports....get your Shillelagh’s out and pull yourself a pint of the black stuff.....it’s our first ever LIVE broadcast of the game that has been the toast of Ireland for centuries. They call it Gaelic football. You might call it WAR. It’s fast. It’s tough. It’s not for the faint hawted. And it’s amateur. That’s right. These boys don’t get paid a PENNY. They do it for the love of the game and the prize on offer is the most famous cup of them all: the Sammy Maguire. Yes, the first ever All-Eire exclusive qualifying match is coming up shortly only on Sky Sports Four...it’s the big one, it’s the one that we’ve all been waiting for.... it’s the boys from Ty-rone against the lads from Lond -umm, Derry and let’s just say: these two have a history. We’ll be right back with a battle royal ....stay tuned to see what happens when Oakleaf Ooomph meets Ty-rone Power.”

Pat Spillane (whispering). “Mary, Mother of Mercy.. what have I done? I’m missing Lyster. I should never have left. Brolly, the cute hoor, tellin’ me I deserved an international audience...”

Dale the Sky Technican: “Down the steps and first left by the Ard Comhairle. Watch out for the Ulster Council chap. He won’t let you in without a pass. And look for Fur”....

Geoff the Sky Presenter: “What’s that?”

Dale the Sky Technican: “Look for a sign on the door saying Fur. That’s for blokes. Min-aw’s for the birds”.

Dale the Sky Technician: “So you’re quite the legend at the old football, Pat. They tell me Kerry’s the home of Gaelic.... Are they all brilliant at the football down your way then?”

Pat Spillane: “Well, between ourselves Dale, the Tralee crowd are fierce overrated.”

Dale the Sky Technician: “I’m half Irish myself, Pat. My grandma came from Mayo. What are they like at the football, then?”

Pat Spillane (giggling under his match programme): “Well Dale, if they handed out medals for winning semi-finals...”

Dale the Sky Technician (sadly). “But they don’t Pat, do they? Nobody ever remembers who wins a semi-final, that’s what my Dad used to say...who’s that bloke with the specs down there on the terrace Pat? He’s waving up at us. He seems angry.”

Joe Brolly (shouting from the stands): “I want nothing to do with this! See this? I think this is a disgrace. I think it is disgraceful. This is the antithesis of what Gaelic Games is suppose to be about! What do we teach the kids? Respect for yourself.

Joe Brolly: “Hold on. And yet this is being toted around the country. And people are saying things like: well, it’s in the rules. It’s NAT in the rules. And I’ll tell ya something else, nobody has stood up for the GAA more than I did. But I’ll not stand up for that. And today.....Pat Spillane is a brilliant footballer. But you can forget about Pat Spillane as a man. What Pat Spillane’s doin here tonight is a total and absolute obscenity. I tell ya...I want nathin’ to do with this. Forget all about the values of our sport. Let them play rugby league! How could anybody go and sit and have a pint with those boys after that?”

Geoff the Sky Presenter (coming back into the room, zipping his fly, laughing): “Did I heat pints, Pat? You Irish boys are keen. Least wait til the show’s over. Then: where we goin’? I’m buyin’. Next stop... drunkenness.

Joe Brolly (pointing his finger at the Sky studio, unfurling a Tricolour): “We’ll watch something else in future. Tell the children to play tennis or something.”

Geoff the Sky Presenter: “We’ll have exclusive coverage of the Eastbourne Open here on Sky...can we get security down there...get that fan removed?”

Pat Spillane: [outraged] “Fan? We call them supporters. That’s not a fan. That’s one of the greats.”

Pat Spillane (turning teary). “We go back years. Three of us and Lyster. We were Showtime, boy. Ireland used to hang on our every word. And do you know what RTE are showing today? They are showing reruns of The A Team. Because we sold out to Murdoch.No! I can’t do it! I’m ringing RTE...Twas all a misunderstanding.”

Geoff the Sky Presenter: “Annnd welcome back to Mon-a-hannnn for our exclusive Sky sports package of the All-Eire qualifiers...and we are delighted to be joined in studio by one of the greats of the game...we can’t show you any highlights because we don’t have the rights. But he wasn’t short of a trick on the field and he’s not short of an opinion off it. Pat Spillane, what can we expect from Derry today? Puke football? Will they smash it?

Pat Spillane [weeping and breaking into song]: “And then I prayed I yet might see/Our fetters rent in twain/And Ireland, long a province be...”

Geoff the Sky Presenter [uneasily]: “Well, they love a sing-song, the Irish.”

Brolly: (Pointing at the Sky studio and laughing as he tells the man beside him): “See that? Our day has come. Our Spillane is being broadcast into every house in Britain right now. Think a that. Spillane could be in the living room of Buckingham Palace right now. Our day has come. This is revenge.

The Man Beside Him: For what?

Brolly: For seven hundred years of British oppression. God save the Queen.