Ireland head for Twickenham with a new spring in their step 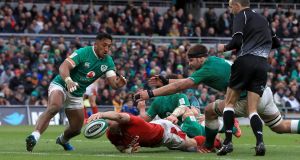 Wales’s Hadleigh Parkes misses a chance to score as he drops the ball on the line during the Guinness Six Nations match at the Aviva Stadium, Dublin on Saturday. Photograph: Donall Farmer/PA Wire

All has changed, changed utterly. Andy Farrell returns to Twickenham for the first time as Irish head coach, with his team rebooted and revived after Saturday’s hugely significant bonus-point win over Wales, and so head to London already seeking a Triple Crown on Sunday week.

It has to be viewed as potentially a very special day for Farrell, and another testing one for his wife, Colleen, given son Owen is the England captain, yet of one thing we can be sure: all concerned will politely bat away any queries that verge on the personal.

However special or even slightly awkward it might be, such is the utter professionalism of Andy and Owen Farrell that you believe the Irish head coach when asked if he was looking forward to returning to Twickenham as a head coach.

“Honestly, I’ve not even thought about it. I’ll go and try and watch the game now, see how they go,” he said of England’s windswept, rain-sodden and hard-earned 13-6 win over Scotland in Murrayfield on Saturday.

“You’d think they’d have a bounce-back moment today, but Scotland played really well last week and people don’t give them credit for how they did play. It’ll be tough up there in Murrayfield. I’ll watch that game, I’ll watch ours. I’ll see what we can get better at and I’ll start thinking ahead to England.”

If England will be the better for their win on Saturday, as suspected, Ireland were all the sharper for having been taken to the wire by Scotland a week before.

Ireland improved their work in the collisions, which in turn enabled them to play more of the game on the front foot, on both sides of the ball. But, playing with freedom from the start, they never showed signs of being rattled even when caught with a Welsh sucker punch to fall behind against the run of play, or when their first-half supremacy with the wind was not reflected in the scoreboard.

“This week we discussed about a consistent performance as far as our physicality was concerned – I think we got that,” said Farrell. “We also spoke about making sure we are in control of our emotions because you can get too ramped-up. The boys want to do well at the Aviva in front of home fans. They want to show that fight in the shirt first and foremost, but I thought our calm heads allowed us to play where we wanted to play.”

Farrell and this Irish team will not be losing the run of themselves, but two home wins from two have been restorative for the squad and, quite clearly, supporters alike.

“It is important but I suppose at this stage for us it is just about learning the lessons and getting better and understanding what we are trying to achieve and keep getting better, and if you can do that on the back of a win all the better, really,” said Farrell.

“I just said to the lads in the changing room that it is a great place to be, you have got two from two and there is still plenty to fix. In the first half we [came away with] not the type of scoreboard that we would have expected with the possession we had down there, but what it did was it created a good buzz and a good belief in the changing room to attack the second half into a strong wind like we did.”

For them to play with such an attitude and ambition, as well as skill, was an achievement in itself, and its origins appear to have been founded in a more collectively driven environment.

Did we fix it all? No, because everyone is looking for the perfect performance. There is still plenty to do

“We want to keep the pressure on,” said Farrell when asked if these wins had given the team confidence. “The review last week was a joint review from all concerned, it was honest and it was open and there was no finger-pointing and we just got on with fixing what we needed to do.

The squad come together again on Tuesday evening for two days of training in Cork. While 10 or so of those not involved in the two match-day squads will return to their provinces for a full round of Pro14 fixtures next weekend, those back-to-back home wins over their fellow Celts makes it a harder match-day squad to break into.

Farrell and his assistants also approach the Twickenham game with a relatively clean bill of health, allowing for Garry Ringrose (fractured thumb) being sidelined for one more game. Robbie Henshaw, who had an exceptional game for 45 minutes in replacing Ringrose before going off for an HIA and not returning, is expected to take a full part in training next week. Johnny Sexton also undertook a head injury assessment after he was shaken up tackling Hadleigh Parkes in the second half.

Caelan Doris will also return to the mix after his concussion against Scotland and whether he or Max Deegan, who made his debut off the bench last Saturday, are released back to Leinster for their game against the Cheetahs next Saturday afternoon may be an indicator as to which of them will feature against England.